Throughout the last bank heist, Tisean (Kimberly Elise) is shot, and dies of her wounds later.  The three remaining ones, Frankie (Vivica A. Fox), Stoney (Jada Pinkett Smith) and Cleo (Queen Latifah), decide to split in order to try to reach the runaway bus safely.

Eventually, the authorities, hot on their trails, catch up to them.  Particularly Cleo, seeing herself doomed as surrounded by cops, decides to die fighting (quite a sad scene), and so the cops open fire against her car, and then against herself, when she steps out mortally wounded and tries to fire back, thus putting her down for good.  This is shown on TV, and her lover and homies see it, heart-broken.

Detective Strode (John C. McGinley) tries to convince Frankie to surrender, but she refuses and, as she runs away, trying to reach the bus stop, is shot down and killed.  This is witnessed by Stoney, who happened to be the only one able to survive and reach the bus to flee to Mexico.  Strode catches her sight as the bus passes close to him, but he keeps silent, while Stoney looks at him with a “please-let-me-go!” expression on her face.

In the end, Stoney keeps the money, but mourns for her fallen friends, and lets her love interest Keith (Blair Underwood) know she is safe, as she calls him and remains silent, he realizes it’s her and exclaims happily: “I’m glad you’re OK!”. 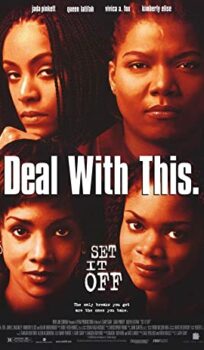