Heinrich (Brad Pitt) returns home to Austria once World War II ends. He gives his son the music box that the Dalai Lama had grown up with. His son won’t speak to him at first, but at the end of the movie Heinrich is seen climbing a mountain summit with his son, and plants a Tibet flag at the top.

The movie ends with the following words:

“One million Tibetans died as a result of the Chinese occupation of Tibet.
Six thousand monasteries were destroyed.
In 1959, the Dalai Lama was forced to flee to India. He still lives there today, trying to promote a peaceful resolution with the Chinese.
In 1989, he was awarded the Nobel Peace Prize.
Heinrich Harrer and the Dalai Lama remain friends to this day.” 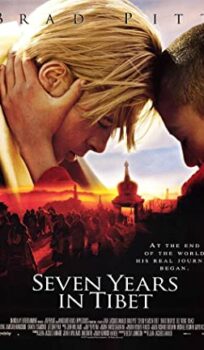