Carrie (Sarah Jessica Parker): After kissing Aidan in Abu Dhabi, Carrie confesses the slip to Big (Chris Noth) even though the other girls think it’s a mistake.  She does this because she can’t stand the thought of keeping a secret from Big and wants him to know that it meant nothing.  When she returns to New York Big doesn’t meet her at the airport and she waits in the apartment all day.  When he finally comes home he admits that he had been hurt by her confession but forgives her.  He does ask that she start wearing a wedding ring as punishment, but because he knows that she isn’t like any other girls he has chosen one with a black diamond.

Miranda (Cynthia Nixon): Having rediscovered fun in Abu Dhabi after quitting her stressful job, Miranda returns to New York and finds a job where she is well respected and valued.  She’s so happy that she keeps right on being fun Miranda.

Charlotte (Kristen Davis): Her fears about Harry (Evan Handler) being tempted by their hot nanny are calmed after Charlotte discovers that the nanny is a lesbian.  Miranda helps Charlotte realize that it’s OK to be stressed out about motherhood and that she doesn’t always have to be perfect.  Charlotte learns to take time to decompress whenever she needs to by visiting Carrie’s old apartment and enjoying some peace and quiet whenever she needs it.

Samantha (Kim Cattrall): Loses her potential deal with the sheikh in Abu Dhabi after getting arrested for kissing Rikard (Max Ryan) in public.  But later that summer, Rikard visits her in the Hamptons and the two consummate their flirtation on the hood of his SUV. 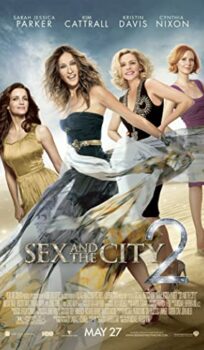