After Jay remote wipes the last copy of the tape from the last iPad, he tells Annie about Howard’s blackmailing scheme. They agree not to pay him and decide to break into YouPorn’s headquarters that night to destroy their servers. They cause very minimal damage to them before being caught by the owner and his wife, but after the wife finds out that Annie writes the Who’s Yo Mommy blog, she admits to being a fan of it and convinces her husband to be lenient with them. He lets them off the hook in exchange for $15,000 to cover the damages, and also informs them that, if they wanted to have their video taken down, all they had to do was send him an e-mail requesting that.

LONG VERSION:
After Jay (Jason Segel), Annie (Cameron Diaz), Robbie (Rob Corddry), and Tess (Ellie Kemper) get the next-to-last gifted iPod from Hank Rosenbaum (Rob Lowe) and delete their sex tape from it, the former two take the latter two back to their house. A short time after getting inside, Robbie and Tess’ son Howard (Harrison Holzer) speaks to Jay alone and reveals that he has been sending him the anonymous text messages stating that he has a copy of his tape. He explains that he found it on his parents’ iPad and downloaded it, and he has just uploaded the video to YouPorn and it should be on their site by tomorrow morning. He tells Jay that only he can delete it, since he was the original poster, and thus wants $25,000 from him in exchange for having the video taken down. He also tells him to not bother telling his parents because he will just deny it and they’ll believe him, and warns him not to tell Annie or else he will have the video attached to the next e-mail blast from the elementary school that he attends with Jay’s kids Clive (Sebastian Hedges Thomas) and Nell (Giselle Eisenberg).

Back at home, Jay remote wipes the final copy of the tape from the last iPad (after Howard brought this form of deletion to his attention), but he fills Annie in on Howard’s blackmailing scheme. They agree to not pay Howard and ultimately decide to drive right to YouPorn’s headquarters to convince the people there to remove the video. They bring their kids along with them since Annie doesn’t want to leave them with her mother for a third time in two days.

When they get there, the place is locked up, so Jay breaks them in and tells the kids that this is just a scavenger hunt they’re doing. They find the room containing the central data core, but when Jay hits one of the servers with a baseball bat, an alarm sounds. They try to escape, but Jay and Annie are halted by the owner of YouPorn (Jack Black), his wife Catalina (Jolene Blalock), and two security guards, so they hide Clive and Nell back in the room. The owner is ready to call the police on them, but Jay tries to explain the situation to him, and then the kids come out. After Jay and Annie say their names at the owner’s demand, Catalina recognizes Annie from her blog, Who’s Yo Mommy, and says that she is a fan, and through this she is able to convince her husband to be lenient with them. The owner talks to Jay and Annie alone and informs them that all they had to do was send him an e-mail requesting to have their tape taken down, and upon finding out their reasons for making it, he insightfully tells them that couples only make sex tapes when they lose track of why they are having sex in the first place. He lets them off the hook after getting $15,000 from them to cover the damages.

Later that morning, Jay and Annie get the kids to Clive’s fourth grade graduation ceremony, and they sit up in the balcony near the stage and talk about their adventures (and how they will have to steal Howard’s computer later to get his copy). Through it, they realize that their adventures have helped them to remember just who they are as people that caused them to fall in love with each other and have sex in the first place, and they give each other their love and kiss. When Clive is called up to play the video yearbook he made on his parents’ laptop, Annie asks Jay if he deleted the video from their own computer, so he scrambles to get to the laptop before Clive accidentally plays the wrong one. He ends up leaping off of the balcony and lands on the laptop and stops the video from being played, but it is shown that Clive had selected the yearbook one.

Back at the family’s house that night, Jay is revealed to have injured his arm and leg in the fall, but Annie got an offer on her blog from the Piper Brothers children’s company. Howard calls wanting to hang out with Clive, but Jay refuses to let his son do so. Moments later, Howard appears at the door and accuses Jay of withholding Clive over the tape, and after Jay sternly tells him that he isn’t paying him a dime, Howard gives him a USB flash drive and says that this contains the only existing copy of the sex tape and that he has deleted all of the other copies. He is giving him this partially to protect Clive, but mainly because Clive is his only friend and he wants to hang out with him.

Later, Jay and Annie watch the video together just once, but find it too uncomfortable to sit through right to the end. They bash the flash drive with a hammer, set it on fire, chop it up in a blender, and finally bury the pieces in the backyard. 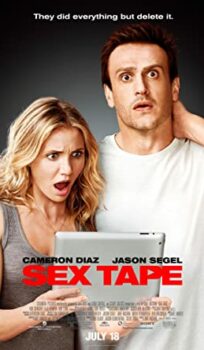