Pooper:
Nikki called them together to take (non-fatal) revenge on Marvin and Bert and thank Miranda and Zachary (and get the latter two together) for truly loving and supporting her. Her plan succeeds on all counts and she evades capture by the police.

Long Ending:
A guy named Zachary (Seth Green) waits at a bar to meet his ex-girlfriend Nikki (Katee Sackhoff) who contacted him out of the blue and after years apart. While waiting, he eventually meets two of Nikki’s other exes, Miranda (Michelle Trachtenberg) and Marvin (Harold Perrineau) who had also been invited to the bar. None of them had seen Nikki for years prior to receiving the invite. Zachary dated Nikki in high school, Miranda met Nikki in a rehab group and helped her overcome a heroin addiction, and Marvin had been in a jazz band with Nikki. Miranda reveals that she learned Nikki had just been released from a mental hospital she had been sentenced to after having successfully plead not guilty by reason of insanity for fatally poisoning another boyfriend (who had also been her stalker before they started dating). The trio of exes also discuss how Nikki lied to them repeatedly during their relationships, but that they all still have love for her.

Nikki eventually shows up with her defense attorney, Bert (William Baldwin). Nikki reveals that she is now engaged to Bert and wanted her “three best friends” to celebrate with her. The trio are incredulous that she would marry her attorney, and that he would agree to marry someone who murdered her last boyfriend. As they talk, Nikki accuses Marvin of planting heroin in their apartment to tempt her back into drugs (which is why she ended up dating her stalker – she had relapsed and was high all the time), but he steadfastly denies it. It also eventually comes out that Bert essentially paid off the psychologists and court employees to facilitate her being found not guilty by reason of insanity and to secure Nikki’s early release so they could be together. Nikki also had to give sexual favors to Bert and his friends for their help.

The foursome eventually confront Nikki about her true motives for calling them together, and she says it is for revenge. They discuss why Nikki would want revenge against them and how she would do it. Eventually, they conclude that if she were to take revenge, it would be via poison (and earlier, Nikki had bought drinks for all of them). Nikki eventually reveals that she has no ill will towards Zachary and Miranda. She notes that Zachary was the perfect first boyfriend who stuck with her as she recovered from systemic sexual abuse she suffered as a child. And she credits Miranda for helping her kick her heroin addiction, which would have eventually killed her. Knowing that Zachary and Miranda have basically been emotionally destroyed by their relationships and subsequent break ups with her, she tricked them into thinking she wanted revenge to help them find each other (thinking they were a perfect match) and to drag them out of their malaise.

Marvin, however, begins to suffer effects that seem like poisoning. As he begins to lose consciousness, Marvin admits to planting heroin in the apartment in hopes that she would relapse and they could stay together. Before collapsing, Marvin apologizes for what he did and Nikki accepts the apology.

Now fearful that Nikki poisoned his drink, Bert physically attacks Nikki and tries to beat her into revealing whether she poisoned him and to give him the antidote if she did. He is only stopped when Miranda uses a gun Nikki gave her in the bathroom (and which Miranda initially thought Nikki was going to use to kill all of them) to shoot Bert non-fatally (realizing that Nikki had pretended to poison Bert to get his confession). The police arrive and arrest Bert, but not before Nikki has fled the scene.

The film ends with Miranda and Zachary leaving the police station. We learn that the police investigated Bert and uncovered his trail of bribery and violence and that his life is essentially over. Marvin was not poisoned, but was drugged by Nikki. He will eventually recover from the drugging. Miranda and Zachary then kiss and drive off together, suggesting they will begin a relationship and start living their lives again. Nikki (standing nearby in a disguise) smiles as she watches Miranda and Zachary leave together, and then drives off into the sunset. 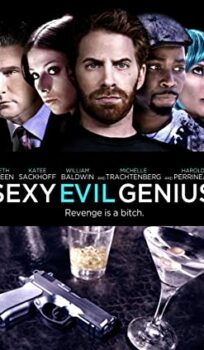