In order to act on stage, Viola (Gwyneth Paltrow) dresses as a boy and gets the part of Romeo, while at the same time, Shakespeare (Joseph Fiennes) is rewriting the script over and over again to change the object of Romeo’s affection, from Ethel the pirate’s daughter to Rosalind and finally to Juliet.

Meanwhile, Shakespeare covers up Viola’s masquerade because the two are in love, despite the fact that she is to marry Lord Wessex (Colin Firth). When opening night comes, the guy who was supposed to be playing Juliet succumbs to Laryngitis, so Viola takes the part of Juliet while Shakespeare assumes to the role of Romeo.

The play is obviously a smash. And the ultimate joke of this comedy is that after the play, the Queen (Judi Dench) asks Shakespeare in the end if he could write a new play called the Twelfth Night, which is about a woman who dresses as a man when she realizes it is the only way she will be accepted. Coincidentally, The main character of Twelfth Night is named Viola, and we are also shown a glimpse of a shipwreck (which is how Twelfth Night begins). 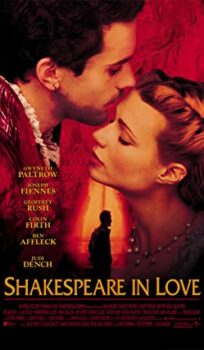