In the end, Shane (Alan Ladd) kills the bad guys (being hit by a bullet in the process), warns Joey (Brandon De Wilde) to avoid a life of violence, and rides off stiffly toward the mountains, ignoring the boy’s pleas for him to return. There are two possible, and in the opinion of most reviewers, equally probable, explanations for this ending. Either: 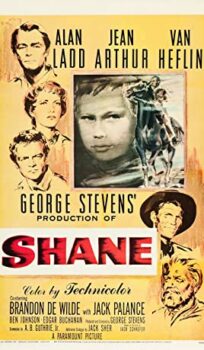