Shang-Chi and the Legend of the Ten Rings(2021)

The ten rings are an ancient set of mythical weapons that give the wearer god-like powers. They come into the possession of Wenwu (Tony Chiu-Wai Leung), a power-hungry man who uses the rings to overthrow nations. While seeking out more power from the secret village of Ta Lo, he encounters the guardian of the village, Ying Li, who not only proves to be a capable fighter against Wenwu, but they also fall in love and have two children, Shang-Chi and Xialing. Wenwu attempted to train his son under his organization, the Ten Rings, after Li was killed by a rival gang. After witnessing his father’s brutality and refusing to take any part in his world, Shang-Chi retreats to America.

Shang-Chi (Simu Liu is forced to revisit his past alongside his best friend Katy (Awkwafina), when Ten Rings assassins sent by Wenwu come looking for him. The two find Xialing, who is angry with Shang-Chi for leaving her with their father. Wenwu finds them all and tells them that he believes Li is imprisoned in Ta Lo, as he claims to hear her voice calling to him. In reality, the voice he hears belongs to an ancient evil creature called the Dweller-in-Darkness, a soul-sucking monster who was imprisoned behind the Dark Gate by the warriors of Ta Lo and the dragon guardian, the Great Protector. Shang-Chi, Katy, Xialing, and the former fake Mandarin, Trevor Slattery, find Ta Lo and meet Li’s sister Nan, who helps the heroes train in preparation for Wenwu’s arrival.

The battle begins when the Ten Rings arrive and Wenwu attempts to open the Dark Gate. Shang-Chi fights his father and eventually acquires control of the rings, but he chooses to not kill Wenwu. The Dweller is freed and kills Wenwu after he relinquishes the rings to his son. Shang-Chi, aided by Katy, Xialing, and the Great Protector, battle against the Dweller until Shang-Chi uses the rings to deliver the killing blow to destroy the beast. The surviving fighters honor their fallen, including Shang-Chi honoring Wenwu.

Shang-Chi and Katy return home but are recruited by the sorcerer Wong for a new mission. They meet Bruce Banner and Carol Danvers to investigate a beacon emitted by Shang-Chi using the ten rings. Meanwhile, Xialing appears to be the new leader of the Ten Rings. 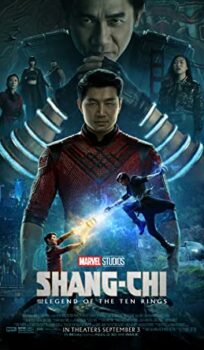