Lou (Mae West) sings in a New York nightclub.  Several men are in love with her, including the nightclub owner, his crooked business partner, a rival gangster, a dangerous convict, and the temperance society missionary from next door (Cary Grant).  The convict escapes from jail, intent on killing Lou for being unfaithful to him.  The nightclub owner makes his real money supplying girls to a prostitution ring.  The nightclub owner is in fear over a super-cop, called the hawk, who is apparently out to catch him.  The missionary is trying, with no success, to turn all the others back to God.  Lou is trying to get all the diamonds and other pricey gifts she can out of all the competing men. A desperate young girl named Sally tries to kill herself in the club bathroom. Lou takes a liking to her, and tries to help her.  The owner promises to get her a good job, but sends her to the prostitution ring.

The escaped convict hides in Lou’s dressing room, while Lou is singing.  When the rival gangster enters, the convict shoots and kills him.  The police raid the place and arrest the whole crew.  It turns out that the missionary (Cary Grant) is really the super cop, and that was his cover to monitor the place.  He had followed Sally, and with her testimony has all the evidence he needs.  The club owner, his crooked associates, and the escaped convict are all loaded in a police wagon and headed to jail.  Lou is told by the police that she is part of it, and will go to jail also.  However, Cary Grant takes her in his carriage.

He had been refusing her advances all movie.  Now, he puts a ring on her and tells her he wants to marry her.  Lou does not give an answer, but from the way she has acted all along, she does not want to be tied down to one man, and certainly not a policeman.

Mae West wrote this movie.  Like many Mae West movies, the movie was not meant to tell a story, but to serve as a vehicle for Mae West to promenade across the screen, deliver her typical one liners and be “Mae West”.  It contains several of her famous lines, including: 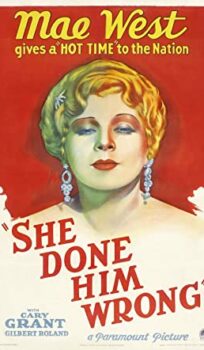