Sherlock Holmes (Robert Downey Jr.) is asked by a secret order of prominent British politicans/royalty to investigate Lord Blackwood, a man who is accused of committing murders and practicing black magic across London. With the help of Watson (Jude Law) and old nemesis/love interest Irene Adler (Rachel McAdams), Holmes determines that Blackwood’s magic tricks are merely acts of advanced science.

The three of them manage to prevent Blackwood and his men from their attempts to poison the British House of Lords/House of Commons using a high-tech machine that will dispel poison. Holmes also learns that Irene was working for Professor Moriarty, and realizes at the end that Moriarty will become a very dangerous foe. Watson proposes to his fiancee, and ends up moving out of Baker Street. 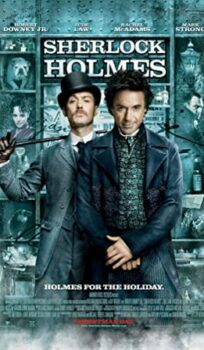