Kirk Kettner (Jay Baruchel) broke up with Marnie (Lindsay Sloane) over two years ago but hasn’t moved on as his family has adopted Marnie and her new boyfriend, Ron (Hayes MacArthur).

Kirk, an Airport Transport Security (ATS) person longing to be a pilot meets up with Molly (Alice Eve) when she forgets her phone in airport security.  Molly invites Kirk to an art gallery party she set up as the event planner to get the phone back.  Devon (Nate Torrence) goes along for support and gets an ego boost from Wendy (Jasika Nicole) who thinks he’s hot.  Devon is the only married guy in Kirk’s circle of airport friends.  Devon asks throughout the movie if Wendy has asked about him.  When he meets up with Wendy at one of Molly’s parties he’s with his wife, Karen (Yan Xi) and disregards Wendy when she says hi.

Molly invites Kirk to a hockey game next.  Kirk brings along Stainer (T. J. Miller) and Molly brings along Patty (Krysten Ritter).  Kirk is lead to believe by Stainer that Molly set this double date up for Kirk and Patty.  Patty explains that Molly likes Kirk.  Kirk gets nervous but goes for it.  Molly and Kirk start dating.  Molly meets Kirk’s family.  Marnie gets jealous.

Kirk meets Molly’s ex, Cam (Geoff Stults), a pilot (and a hard 10).  Kirk meets Molly’s parent’s but doesn’t behave properly as he came in his pants just prior.  Molly’s family dog is there and starts licking Kirk’s wet pants.  Kirk quickly leaves with no explanation.  This pisses off Molly.  Once Kirk explains himself everything is back on.

Cam tells Kirk that Molly isn’t perfect as she has one defect he’s going to have to find out for himself.  Kirk is scared as he and Molly are bound to have sex soon.  Jack (Mike Vogel) convinces Kirk to shave his nether regions.  Kirk tries this at home but needs Devon’s help to finish up.

Molly has webbing between her right big toe and next toe.  Kirk is relieved that this is her ‘defect’.  Molly is offended and they are essentially broken up.  Kirk goes back to Marnie content to live his life in mediocrity.

Stainer feels bad and finds out that it doesn’t matter if the girl is higher in the ranking as the boy as long as they are both okay with their own ranking.  Stainer gets Molly to the airport to see Kirk before he goes on a family trip with Marnie.  He reveals that Kirk helped him out when he was young.  His nickname is Stainer because he used to wet his pants.  Kirk told him to own the nickname so no one can hurt him with it.

With the help of Devon (airline ticket person) getting Molly plane tickets.  Jack (ground crew) giving the plane trouble so it gets delayed.  Molly and Kirk are reunited.

The movie ends with Kirk taking Molly on a two person plane ride with him in the pilot seat.  They fly off into the big blue together. 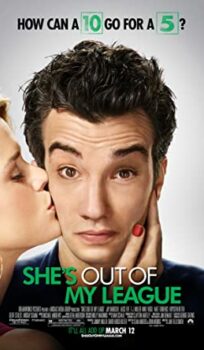