Short pooper:
Thanks to the folks of the Moby’s restaurant, David (Geoffrey Rush) manages to find some stability and genuine appreciation, thanks to his piano abilities. Through them, he meets, falls in love with, and eventually marries Gillian (Lynn Redgrave), one of the staff members, who is also an astrologist. David goes on to perform a concerto in front of a cheering audience and comes to terms with the eventual death of his overbearing father, Peter (Armin Mueller-Stahl), who, despite his best intentions, was the cause of the vast majority of David’s lifelong struggles.

Longer version:
The movie follows an in medias res depiction of the life of pianist David Helfgott; it starts with him, as an adult, coming across the paths of the owner, staff and patrons of Moby’s, which marks a stabilizing turning point in his life.

We see passages of his childhood (David being played by Alex Rafalowicz), when, under the extremely strict guide of his father, Peter, he develops his remarkable talent; eventually, a local teacher, Ben Rosen (Nicholas Bell), takes him under his wing and leads him to recognition beyond Australia; however, Peter thwarts the efforts to send David abroad, to prosper as a recognized musician, his justification being that “it will destroy the family”. Matters come to a head when David (played by Noah Taylor), as a teenager, is invited to study under Dr. Cecil Parkes (John Gielgud), at the Royal College of Music in London; he finally stands up to his father’s manipulation and leaves, which causes Peter to completely banish him from ever returning.

Despite being far away from the shadow of Peter, David, even though blossoming as a pianist, is still something of a prey to his father’s influence and his insistence in perfecting the Rachmaninoff’s Third Concerto -an idea Peter instilled in him since childhood- leads to acclaim, but also to him having a mental breakdown and being institutionalized, something he never fully recovers from, especially when Peter upholds his disownment and causes David to relapse and be in and out of mental care for years.

An encounter, at the institution, with a volunteer named Rachel (Martha Kaczmarek), who recognizes him from childhood, decides to help him reintegrate to society and takes him home; this doesn’t last, as David is unintentionally destructive and extremely hyperactive, so she has him relocated to another place where he can easily come and go. One night, during a heavy rainfall, David wanders off, gets lost and winds up at Moby’s -where the film began-. Everyone present first dismisses David as someone crazy, until he blows them all away by flawlessly playing “The Flight Of The Bumblebee”. They embrace him and he gets to play regularly at the restaurant.

He gets introduced to Gillian, a staffer of the restaurant who also does astrology. Despite how little they seem to have in common, Gillian gives him a chance, goes to great lengths to learn to understand him and take care of him and, in turn, they fall in love and marry.

Some time later, a big comeback is staged for David; before it happens, David has one final encounter with his father, who tries to get his attention with his usual, condescending ways; however, when David clearly shows that Peter no longer has any grip on him, the man leaves, feeling dejected; David seems him part and mumbles, “Good-bye, Daddy”.

The concert takes place, with David masterfully playing the piano and receiving a standing ovation in the end; his expression of enthusiasm acknowledging the acclaim slowly morphs into sadness and tears, as he has to come to terms to the fact that he was never able to be the pride and joy of his father. The film ends as he visits the grave of Peter, with Gillian by his side comforting him. 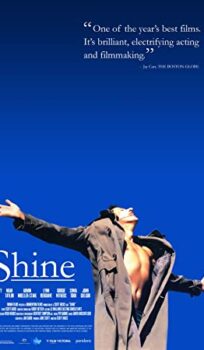