Smith (Clive Owen) deduces that presidential candidate Senator Rutledge (Daniel Pilon) needs the bone marrow from “Baby Oliver”, after noticing that Oliver stops crying when he hears heavy metal music, finding the baby factory above the heavy metal music club, discovering that all of the dozens of men that he has killed protecting Oliver have pistols made by gun manufacturer Hammerson (Stephen McHattie) and reading in the newspaper that lactating prostitute Donna (Monica Bellucci) is using as Oliver’s diaper that Rutledge is pushing tough gun control legislation.

After putting Donna and Oliver on a “bus to nowhere”, Smith confronts the ailing Rutledge on his campaign jet, only to find that Hammerson and Hertz (Paul Giamatti) are already there. Hammerson and Hertz were planning to use Oliver to blackmail Rutledge into exempting Hammerson from the gun legislation. Now all of them just want to know what Smith has done with the baby.

Smith takes Rutledge down into the plane’s cargo hold, shoots him dead, but ties the Senator’s body to the access door. This gives Smith time to parachute from the plane. He fights off some pursuing skydivers, but is wounded. Smith is captured and has all of his fingers broken by Hertz. Smith manages to escape and kill Hammerson, but he can’t fire a pistol at the advancing Hertz. So, Smith retreats to a living room and holds bullets between his fingers close to the fire in the fireplace as Hertz approaches. The bullets go off and this wounds Hertz enough so that Smith can finish him off after a slow draw standoff.

Smith takes the same bus to nowhere to find Donna and Oliver. He discovers Donna watching over Oliver while working as a waitress in an ice cream parlor. As the two share a passionate embrace, a trio of ugly hoods pick the wrong moment to hold up the place. 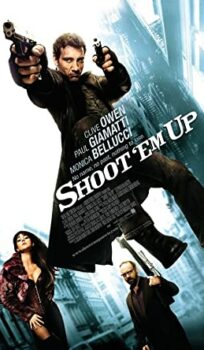