This movie has the shady distinction of having been, to date, the only NC-17 rated movie ever to be widely released in theatres, and the most commercially successful, for that matter (even though it was a box office bomb). It also sank the fledgling film career of main star Elizabeth Berkley, who was widely known at that time for her role in “Saved By The Bell”.

Short pooper:
Nomi (Elizabeth Berkley) -whose real name is Polly Ann Costello, as discovered and revealed by Zack (Kyle McLachlan)-, seeing she will not be able to obtain justice for the vicious sexual assault of her friend Molly (Gina Ravera), decides to do right by Molly herself; she seductively works her way into musician Andrew Carver’s (William Shockley) room and beats him unconscious. Then, she visits both: Molly, to inform her of how she avenged her; and Nomi’s showgirl nemesis Cristal (Gina Gershon) to confess that she was guilty of Cristal’s accident. Cristal, however, admits she did the same to another fellow showgirl, many years prior. They make up and, before Nomi leaves, share a kiss. The film ends with Nomi hitchhiking out of Las Vegas, towards Los Angeles; she runs, coincidentally, into the same driver who robbed her at the beginning of the film and turns the tables on him by doing the same.

Long version:
After the brutal gang-rape of Molly by respected artist Andrew Carver and two of his bodyguards that landed her in the hospital, a furious Nomi wants to report the attack and seek justice for her friend. However, Zack coldly scoffs her by stating that the hotel would bribe Molly into silence, so the crime would not go public; he also scolds her about her past: her actual name is Polly Ann Costello -this explained why, whenever someone jokingly called her “Pollyanna”, she flinched-, who ran away from home after their parents died in a murder-suicide, became a prostitute and ran into trouble with the law several times because of it. With this, he makes it clear that, should Nomi say anything for anyone, he would expose her.

Stonewalled by Zack’s actions, Nomi decides to take matters into her own hands. She dresses provocatively and arrives in Carver’s suite, posing as a call girl. Once in, she seduces Carver to get him to drop his guard, after which she savagely punches and kicks him into unconsciousness while hurling profanities -never understood how come his bodyguard by the door did not bust in, with all that screaming and fighting, but that’s me!-. The deed done, she calmly leaves and tells the bodyguard that “Carver said he did not want to be disturbed”.

No longer feeling comfortable with herself and the turn her life has taken as a showgirl, Nomi decides to leave town. Before doing so, she pays two visits at the hospital; one to a still-weak Molly, to tell her how she got justice for her. The other, to Cristal, where they make amends and Nomi admits having been the one who pushed her down the stairs and apologizes for it. Cristal, however, tells Nomi she did the exact same thing, years prior, to another showgirl who was above her -a mirror of their own situation- and that she would forgive Nomi, since her lawyers bargained a massive money settlement with the hotel in her favour. The two women exchange a passionate kiss and Nomi leaves.

Bookending the story, Nomi is seen back on the road, intending to hitchhike to Los Angeles and is picked up… BY THE SAME DRIVER WHO ROBBED HER AT THE BEGINNING OF THE STORY. When Nomi realizes it, she retaliates by robbing him at knifepoint. They are heard scuffling and the camera pans away to show a road sign of Nomi as the main attraction of the show “Goddess” of the Stardust Casino. 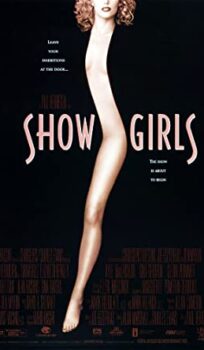