A happy New York couple gets married. Ben’s a photographer and Jane loves him dearly.  They go to Tokyo, Japan for his job on a photo shoot.  On their way driving down a not so well lit country road Jane sees a woman walking across the road in a dress, hits her with the car and runs over her, sending the car off the road.

Pictures taken throughout their trip show “spirit photos”.  The spirit seems to be following Jane, trying her hardest to scare her.

During a photoshoot outside of the offices Ben works for, Ben is snapping away, and when switching to black and white sees this same girl.

Jane finds  a photo of the girl that Ben took, meaning that Ben knows the girl, her name is Megumi, she was a translator in the office he worked in when in Japan two years or so before.  He explains that she and him had a relationship, that she had never had a serious one and became over attached.  Her father didn’t approve of Megumi’s relationship with Ben, and died not too long after casting her away.  Ben has his friends tell Megumi to leave him alone, and she disappears.

Flash back to now.  Both of Ben’s friends are seemingly killed by Megumi taunting them.

Jane and Ben go to Megumi’s house, and find her sitting in a room with flies.  She’s DEAD!!!!  She killed herself with three bottles of poison, Jane chalks it up to a case of unrequited love.

Flash through a bunch of other scary movie junk, the scares, the gross kiss Ben gets from Megumi, Jane getting trapped under sheer curtains by Megumi’s spirit.

Megumi is cremated, it would appear all is well.

Back in New York Jane is happy, finds a disposable camera from the night she and Ben were married.  When she developes the film she finds Megumi in the photos.  Realizing that the photos put together make a flip book, she sees that Megumi crawls across the floor to walk through a wall where a giant picture of Jane is.  Jane walks to the wall where the photo is, looks to the side and sees the door, because apparently she forgot this closet in HER HOUSE exists.  She finds an old bag that Ben used on his last trip to Japan and finds a camera, one that Megumi gave Ben.  The memory card is still in it, so she loads it in her computer to find that Ben and his friends drugged Megumi so his two friends could rape her and Ben could snap photos to use against Megumi if she doesn’t leave him alone.

Jane madly leaves Ben, and he realizes he’s lost everything.  He goes around snapping polaroids trying to find Megumi. He drops the camera after four or so unsuccessful polaroids and the camera snaps a pic on it’s own, revealing Megumi is now sitting on his shoulders.  He puts a light with electric wires on it to his neck to kill himself, screen goes black.

Ben is now in a mental hospital, suicide attempt unsuccessful, hunched over.  Why is he hunched over???  Because Megumi, revealed in a window reflection, is still on his back. 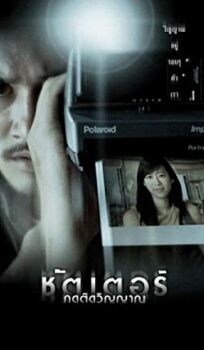