In 1977, the punk rock movement was spreading throughout England, and the most popular punk band was The Sex Pistols. Early that year, Sid Vicious (Gary Oldman) joined the band as a bass player, even though he didn’t know how to play it. One night, after a concert, Sid meets Nancy Spungen (Chloe Webb), an American girl living in London and a big Sex Pistols fan. They immediately hit it off, and soon Sid and Nancy are inseparable. At this point, both Sid and Nancy were abusing drugs, but it was Nancy that introduced Sid to heroin.

As the movie progresses, Sid and Nancy continually argue and fight, but they are also dependent on each other and never break up. As their lives begin to spiral downward from their heroin use, the band also begins to fall apart. In early 1978, while on tour in the US, lead singer Johnny Rotten abruptly quits the band. After being hospitalized due to his drug use, Sid is essentially kicked out of the band. Once recovered, Sid calls Nancy, who leaves London and joins him in the US. After being rebuffed by her family, Sid and Nancy move to the Hotel Chelsea in New York. It’s at this time that Sid decides to become a solo artist and Nancy will be his manager.

Nancy is able to book Sid and some of his musician friends to a few gigs, and she uses the advance money to get more drugs. However, Sid is so strung-out from the heroin that his performances bomb, and soon no one wants to book him to perform. So now, Sid and Nancy only have each other, and they use what money they have to get drugs. At various points, both of them want to get clean in order to restart Sid’s music career, but they aren’t able to for very long. One night, Sid and Nancy have a violent fight, and Sid accidentally stabs Nancy. Since both of them are high on heroin, neither of them realize that she is bleeding profusely, and she dies from the blood loss a few hours later. The next day, Sid is arrested for Nancy’s murder, but is bailed out by the record label.

After being bailed out, Sid goes to a pizza place. After eating, he calls for a cab. The last scene in the movie has Sid get into the cab with the spirit of Nancy already inside. A title card at the very end says that Sid died of a drug overdose in February of 1979 at the age of 21. 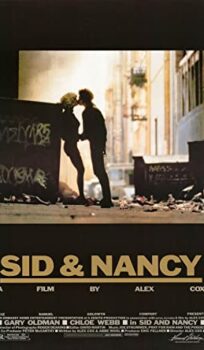