The entire film is filled with silent-movie gags and a music score, but no lines are spoken (with one exception).

Mel Funn (Mel Brooks) is a famous movie director who’s career has been ruined because of his drinking problem.  Now that he’s sober again, he and his two associates Dom Bell and Marty Eggs (Dom DeLuise and Marty Feldman) are trying to pitch his idea for a modern day silent movie to the Chief of Big Picture Productions (Sid Caesar).  The Chief turns them down, but if they can sign up big name stars to appear in the film, he’ll agree to it.  Big Picture Productions needs a hit because they are trying to be bought out by the New York based conglomerate Engulf and Devour.

Throughout the movie, the trio successfully recruit big name actors such as Burt Reynolds, James Caan, Liza Minellli, Anne Bancroft, and Paul Newman (playing themselves in cameos).  They also try to recruit the world famous mime Marcel Marceau, but he literally says no (it’s the only spoken word in the entire movie).  While they are casting their film, the executives of Engulf and Devour are trying their best to stop them.  If the movie is not made, they can buy the movie company cheaply.  When all of their efforts fail, they hire the famous nightclub singer Vilma Kaplan (Bernadette Peters) to pretend to fall in love with Mel.  Mel and Vilma hit it off and start a relationship, but when Dom and Marty find out and tell Mel she was hired to love him, he is devastated and falls off the wagon the day before the movie is to begin filming.

That same night, Vilma quits Engulf and Devour, claiming that she has really fallen in love with Mel.  She, Dom, and Marty find a drunken Mel and sober him up with hundreds of cups of coffee.  Awakened, Mel is able to shoot the movie in record time.  On the day of the movie’s debut, Engulf and Devour steal the only print of the film.  While Vilma distracts the waiting audience, the trio get the film back and gets away from the executives after a car chase.  The movie finally runs, and it’s a hit.  The movie company is saved, Mel gets his career back, and he gets the girl too. 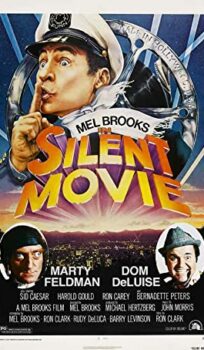