The werewolf attacks Marty (Corey Haim), Jane (Megan Fellows), and their Uncle Red (Gary Busey) at their home during the full moon. Marty shoots it in the eye with a silver bullet. The dead werewolf transforms into the town minister, Reverend Lowe.

Since the wolf is revealed near the middle of the movie to be the minister, it seemed hard to give a really brief synopsis.
So here is the extended version:

Paralytic Marty Coslaw (Corey Haim) decides to sneak out into the woods at night on his combination wheelchair-motorbike, even though several people in town have been butchered by what Marty suspects is a werewolf. Setting off his contraband fireworks provided by his “bad role model” uncle Red (Gary Busey), Marty draws the attention of the werewolf, and the two come face-to-face. Marty launches a giant bottle rocket into the monster’s eye and full-throttles his wheelchair home.

The next day, Marty convinces his sister Jane (Megan Follows) to look around town for anyone missing a right eye. Jane goes door-to-door collecting for the church bottle and can recycling drive, but finds no one-eyed citizens. Frustrated that her brother tricked her into wasting the day on a wild goose chase, Jane drops off the bottles and cans at the church—and finds Reverend Lowe sporting a bandage over his right eye.

The Reverend, who is aware of his actions as the werewolf, tries to run Marty off the road. Instead, he traps Marty in an old, boarded-up, covered bridge and attempts to kill the boy. Marty is able to get the attention of a nearby farmer, but Lowe slips into the shadows and escapes. Marty and Jane go to Uncle Red because he is the only adult who might believe them. Of course, he DOESN’T believe them until he sees Marty’s dented fender and recognizes the blue paint as the color of Lowe’s car.

Uncle Red tells the story to the sheriff, who decides to check out Lowe—at night? In the church garage, the sheriff finds the broken ball bat of one of the victims, along with a certain minister in the process of wolfing-out. Bye-bye sheriff.

Marty, Jane, and Uncle Red deduce that Lowe will come for Marty on the next full moon. After researching werewolves and learning that silver is always listed for killing them, Marty and Jane have their silver necklaces melted into a silver bullet. Uncle Red arranges a “Publisher’s Clearinghouse” prize vacation for Marty’s parents, both for their safety and to give Red and the kids freedom to prepare for the werewolf. As the moon is about to go down, Red decides nothing is going to happen. Just then, Jane looks out the window, sees the werewolf, and screams! Red is convinced they are imagining things, and he unloads the gun. The power goes out, and a crash is heard at the other end of the house. As the three breathlessly wait to see what made the noise, the werewolf explodes through the wall BEHIND them and tackles Red. The bullet falls into the floor air vent, and the gun goes the other direction. Jane gets the gun, while Marty reaches for the bullet. The wolf, who has just thrown Red across the room, approaches the kids. Marty loads the bullet and shoots the wolf through his other eye. Apparently a silver bullet through the brain works as well as through the heart. The wolf transforms back into an eyeless, naked Reverend Lowe and dies. 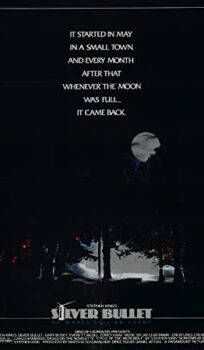