Reverend Russell (David Strathairn) is Joe’s (Joseph Mazzello’s) biological father.  Both Joe and Simon (Ian Michael Smith) discover it under different circumstances; Simon, while trying to recover his baseball cards, sees the fateful baseball that killed Rebecca (Ashley Judd) earlier in the film, kept in a bookshelf; Joe, when asks Reverend Russell for the kitchen’s keyset, while at the retirement, and the Reverend tosses him the keyset, which he catches with his left hand, and then Reverend says: “You’re a lefty.  Just like me”.

Simon, and Ben Goodrich (Oliver Platt), run off to tell Joe about it; however, just as they both arrive, Reverend Russell has finished telling Joe about his origin.  Joe runs away in tears, and Simon comes along to comfort him.

Later, the retirement is over, and they all drive off in a bus, while Ben follows them behind in his car.  Then, suddenly, a deer stumbles in front of the bus, causing the driver to lose control and drive off a cliff and into a lake.  In the middle of the panic that comes up, Simon stands up, calms everyone and directs a rescue, leading everyone out of the bus, as it is stuck between rocks.  But then, he realizes one boy is still inside, and, as he goes back looking for him, the current moves the bus and causes it to sink slowly.  Doing a tremendous effort, Simon manages to get the boy out in time, but the bus flounders completely.  Joe and Ben swim into the lake, but then Simon emerges to the surface, floating, obviously overcome by the cold and his overwhelming effort.  All of this catches the collective attention, and Simon is hailed as a hero, but, sadly, also causes his death the next day after the incident.

Some time later, Ben adopts Joe.  The next summer, Joe goes alone to that creek he used to go to with Simon, and sees a deer; this makes him remember that painful incident.

In the end, the adult Joe (Jim Carrey) -who had been telling the story in voiceover-, as he is standing beside Simon’s grave, is called by his son (John Mazzello, Joseph’s real-life brother), who happens to be called Simon, and they drive away together.

The movie ends with a last shot of the grave, and the stuffed armadillo standing over it, as an eternal companion. 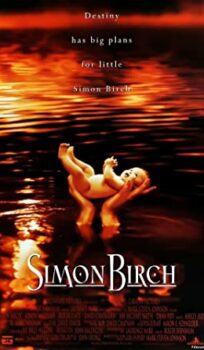