POOPER
Marv kills the frat boys, but doesn’t remember how he got the jacket.

Johnny is Senator Roark’s son.  He beats his father twice in poker, which embarrasses the Senator, who then kills Johnny.

Nancy and Marv, with the help of Hartigan’s ghost, kills Senator Roark.

LONG VERSION:
The movie is told in four overlapping stories. Some of the characters from the first movie, such as Dwight, Manute, and Bob, appear in this movie, but are played by different actors.

JUST ANOTHER SATURDAY NIGHT
Marv (Mickey Rourke) is on a road overlooking The Projects, along with a crashed police car, two dead frat boys, and no memory of how he got there.  After taking his medicine, the memories return.  Marv was at Kadie’s Saloon watching Nancy (Jessica Alba) dance.  He steps outside after her dance and sees four frat boys trying to burn a homeless man alive.  After Marv stops them, one of them shoots him and calls him Bernini Boy.  They attempt to run away and Marv chases them, stealing a police car in the process.  He crashes the police car into the frat boys’ car, killing two of them (this is where this story began), and the other two run to The Projects.  With the help of his neighbors, Marv kills one of the boys and shoots the other one with his own gun.  Marv asks what a Bernini Boy is, and the frat boy tells him that a Bernini is the type of jacket he’s wearing.  As he cuts the boy’s throat, Marv realizes that he doesn’t remember where he got that jacket.

THE LONG BAD NIGHT (PART ONE)
Johnny (Joseph Gordon-Levitt) is a young gambler who arrives at Kadie’s, looking to buy into the high stakes poker game in the saloon’s back room.  Taking Marcie, one of the dancers, with him as a good luck charm, Johnny gets in the game, which is run by powerful Senator Roark (Powers Boothe).  Johnny cleans out the Senator, but is told by one of the other players to leave town immediately if he wants to live.  But Johnny ignores the advice and takes Marcie out on the town.  On their way back to his hotel room, Johnny is jumped by Roark’s goons and thrown into their bosses’ limo.  Roark tells Johnny that he recognizes him as his illegimate son, and has his fingers broken and is also shot in the leg.  Instead of killing him, Roark lets him live and throws him out of the limo.  An injured Johnny swears revenge on his father, the Senator.

A DAME TO KILL FOR
Dwight (Josh Brolin) is a private detective investigating a businessman (Ray Liotta) having an affair with a hooker.  When the businessman tries to kill the hooker, Dwight rushes into the hotel room and saves her life.  After getting paid by the businessman’s wife, Dwight gets a phone call from his ex-lover Ava Lord (Eva Green).  She tells him that she is being abused by her husband and his chauffeur Manute (Dennis Haysbert) and needs to see him.  Despite his better judgment, he agrees to the meet, and they fall for each other again.  Manute then shows up, beats up Dwight, and takes Ava back home.  Determined to save her, Dwight recruits Marv and together they storm the Lord Mansion.  While Marv overpowers Manute (and takes his eye out!), Dwight goes into the home and kills Mr. Lord.  A grateful Ava thanks Dwight, then shoots him.  She tells him that by killing her husband, Dwight just made her a very rich woman and she doesn’t need him anymore.  She shoots Dwight again in the face, and after he falls out of a window, Marv rescues him and they flee to Old Town.  Once there, another of Dwight’s ex-lovers, Gail (Rosario Dawson), who runs Old Town, recognizes him and with the help of her top assassin Miho, gets Dwight’s face reconstructive surgery.  While recovering, Dwight plans his next move.

Meanwhile, Mr. Lord’s murder is being investigated by police detectives Mort (Christopher Meloni) and Bob (Jeremy Piven).  Ava tells them that her obsessive ex-lover Dwight killed her husband in a jealous rage.  Bob is skeptical, but Mort, being seduced by Ava, believes her.  Now having an affair together, Ava tells Mort that she will end the affair and tell his wife everything unless he finds and kills Dwight.  After finding out Dwight is hiding in Old Town, Mort and Bob head there.  Bob pleads with Mort to stop listening to Ava and not to kill Dwight.  An increasingly enraged Mort then shoots Bob and dumps his body in a ravine.  Realizing what he just did, Mort then kills himself.  Upon hearing of the death of Mort, Ava has no choice but to go to mob boss Wallenquist (Stacy Keach) and have one of his men kill Dwight.

Manute picks up that man at the train station, but he insists on driving himself and his girlfriend to the Lord Mansion, with Manute leading the way.  Upon entering the mansion, Manute instantly recognizes the man as Dwight, with his new reconstructed face, and the girlfriend is Gail in disguise.  After Dwight shoots Manute and goes after Ava, Gail lets Miho out of the trunk and together they kill all of the bodyguards.  Dwight finds Ava, with Manute in pursuit, but Ava shoots Manute instead of him.  She attempts to seduce Dwight to allow her to live and get away, but instead he shoots Ava and holds her in his arms as she dies.

THE LONG BAD NIGHT (PART TWO)
Johnny goes to unlicensed doctor Kroenig (Christopher Lloyd), who patches him up for his last $40 and his shoes.  After leaving Kroenig’s “office”, Johnny remembers that Marcie was waiting for him in his hotel room.  He arrives there, only to find Roark, his goons, and a dismembered Marcie.  Johnny runs away, and again Roark lets him live.  The next night, after receiving a dollar from a sympathetic waitress (Lady Gaga), Johnny takes that dollar and hits a slot machine’s jackpot.  Using that money, Johnny returns to the poker room and demands a rematch.  He allows Roark to win the first few hands, then tricks him into going all-in before revealing the better hand.  Johnny has his revenge, telling Roark that he will always be known as the man who beat you twice, and that story will be told the rest of your life.  An embarrassed and angry Roark then kills Johnny.

NANCY’S LAST DANCE
Four years after the suicide of John Hartigan (Bruce Willis), Nancy is still in deep depression over his death.  She is now an alcoholic and has taken to using a loaded gun as part of her act.  On the same night that Johnny first appears at Kadie’s, Nancy tries to shoot Senator Roark, the man she blames for Hartigan’s death, but can’t bring herself to pull the trigger.  That night, Roark appears in Nancy’s dream and taunts her about not being able to kill him.  A distraught Nancy smashes a mirror and uses the shards to cut her face.  Hartigan’s ghost, who has been following Nancy around all this time and occasionally talks to her, tells her that if a man did that to her, he’d kill him.  That gives Nancy an idea.  She goes to Marv and tells him that Roark was responsible for the scars.  He and Nancy then leave the saloon to go after him, but are met by three gunmen who plan to rob the saloon.  They easily kill the robbers and take their weapons.  Now at Roark’s compound, Marv and Nancy quickly kill all of Roark’s goons.  Marv is seriously wounded, but will survive.  Nancy finds Roark, but he gets the drop on her, shooting her twice.  Just as Roark is about to finish her off, Hartigan’s ghost appears in a mirror.  This distracts Roark just long enough for Nancy to get her gun back and kill him. 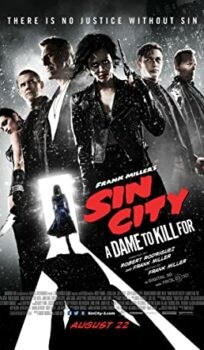