“The Dancing Cavalier” is a musical sensation and the audience loves Lina Lamont’s voice, which is really Kathy Seldon’s (Debbie Reynolds) voice.

On opening night when the audience insists on hearing Lina perform, Kathy reluctantly stands up behind the curtain to sing while Lina just mouths the lyrics.  Don (Gene Kelly), Cosmo and R.F. raise the curtain while Lina is on stage, revealing her to be a fake and proving that Kathy is the real star of the film. 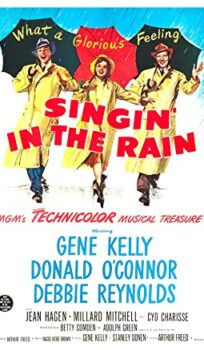