iHedra “Hedy” (Jennifer Jason Leigh) is, in reality, Ellen Besch, a psychotic loner suffering from “Survivor’s Guilt” Syndrome, caused by the death of her identical twin sister many years ago.  Before moving to New York and landing in Allison “Allie’s” (Bridget Fonda’s) place, she was living with another girl in Tampa, Florida, whom she killed because she was emulating her -just as she had been gradually doing with Allie- and the girl discovered her past and tried to have her put away.

Hedy goes as far as killing Sam (Steven Weber) after she poses as Allie, has sex with him, he finds out, freaks out and decides to tell Allie about it.  Later, she also kills Allie’s former client, Mitch (Stephen Tobolowsky), and almost kills Graham (Peter Friedman), the gay neighbor from upstairs.

After being taken hostage by Hedy at Graham’s appartment, and a long, drawn-out struggle between the two, Allie manages to escape, just to have Hedy turned against her, “because Allie was trying to leave her”.  Their battle lead them both to the basement, where Allie finally gets the upper hand and kills Hedy, stabbing her twice in the back with a screwdriver.

In the final scene, Allie is seen mourning for Sam, and says, in voiceover, that Ellen’s/Hedy’s parents told her that, for many years, they tried to make Ellen understand that her twin sister’s death was not her fault, to no avail, since she never forgave herself for surviving; Allie also says that she would do the right thing and forgive both Hedy for Sam’s murder and herself, so she wouldn’t find herself in the same emotional predicament.  The camera pans to a creepy half-to-half photo of both Hedy and Allie together, and the movie ends. 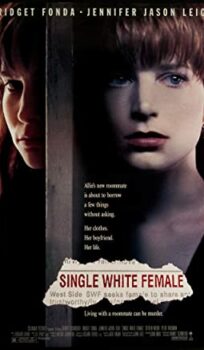