Pooper:
Bugghul is a demon that possesses children, convincing the children to kill their families prior to taking their soul for eternity. His curse manifests once the family he terrorizes moves to a new house, so when Ellison flees with his family back to their old home, his daughter kills him, her mother, and brother before joining the rest of Bugghul’s children. Bugghul’s films remain in Ellison’s attic, awaiting the next family that will move in.

Long Ending:
Ellison (Ethan Hawke) is a non-fiction crime writer whose fifteen minutes of fame is up. In order to try and write a new hit true crime book, he moves his family including wife Tracy, son Trevor, and daughter Ashley (Clare Foley) into a house where a family was hung from a tree and one of the children abducted. Ellison tells Ashley that she can paint anywhere she wants on the walls of her room, but nowhere else in the house. Ellison investigates the attic, where he finds a box of home movies.

Ellison watches the movies and finds each one is of a different family. The videographer is always unseen, and at the end of each film most of the subject family is slaughtered brutally. Ellison works with a deputy (Jake Ransone) to determine the identities of each family. He soon discovers a figure with a ghostly white face in each film. The figure, as well as five ghostly children, soon begins to haunt Ellison.

With the deputy’s help, Ellison gets in touch with a professor specializing in the occult (a cameo by Vincent D’Onofrio) who states that the figure is Bugghul. The legend is that Bugghul possesses children and then feasts on their souls for eternity. Bugghul can only enter this world when someone views his image. Ellison also discovers that one child was abducted from each family in the home movies, and that each family lived in the house where the prior family was killed. Ellison realizes that he and his family now live in the house where the last murders took place, and are in imminent danger. Later, Ashley is found painting in another room, explaining this is the room where the girl who was abducted by Bugghul used to live.

Ellison realizes he must have unleashed Bugghul, and so he burns all the home videos and destroys his research, hoping he acted in enough time to seal Bugghul away. He then gathers his family and they flee from the murder house back to their original home. Once there though, he gets a panicked call from the deputy. The deputy explains that each family they researched was only killed after they moved out of the house where they first came into contact with Bugghul. Ellison hangs up and begins to react, but falls to the floor. The coffee he had just drank was prepared by his daughter, Ashley, and was clearly drugged. Ashley is obviously possessed by Bugghul.

Ashley records herself dismembering Ellison, as well as her mom and brother, with an axe. She then uses their blood to paint all of the walls in the house. Bugghul then appears and brings Ashley into his realm to join the abducted children from the other families. We then see the box of home movies fully restored in the attic of Ellison’s house, with a new one added entitled “House Painting ’12” that clearly depicts the murder of Ellison and family. Before the screen fades to black, Bugghul “jumps out” at the audience.

Home Movies:
• Hanging Out – Film depicts a family being hung from a tree. This is the family whose house Ellison moved in to.
• Sleepy Time – Shows a family having their throats slit as they sleep.
• BBQ – A family is burned alive while bound inside of their station wagon
• Pool Party – A family is bound to lawn chairs, that are then pulled into a pool where the family drowns.
• Lawn Work – The film shows a family getting run over by a lawn mower while bound and gagged.
• House Painting ’12 – Ostensibly shows Ellison and family being chopped up with an axe while drugged. 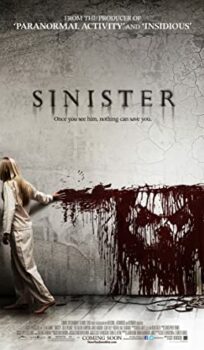