When she spots her mother among the audience, Rita (Lauryn Hill) starts freaking out, not wanting to do the solo introduction of “Joyful, Joyful”; nonetheless, she stands up and does it.  Meanwhile, Deloris/Mary Clarence (Whoopi Goldberg) instructs the rest of the kids to take off their robes and just perform in plain, casual gear.

The Saint Francis Choir Group gives a very spirited, animated and hip-hopish rendition of “Joyful, Joyful”, which lands them as First Prize Winners of the competition.

Shortly after, it is announced that, due to their triumph, the Saint Francis Academy will remain open and the choir is expected to contend in next year’s competition, to the kids’ joy and Mr. Crisp’s (James Coburn’s) dismay, as he was trying to reveal Deloris’ true identity.  It is anyhow, discovered.

Rita and her mother -who now acknowledges her daughter’s talent- make up, and the students enquire Deloris about a rumor of her being a “lounge singer from Vegas”, to which she answers: “I am a STAR!”.

The film ends, and the credits include a rendition of “Ain’t No Mountain High Enough”, with the entire cast performing. 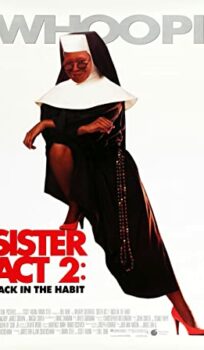