Robin (Anne Heche) and Quinn (Harrison Ford) are stranded on a remote island after Quinn’s plane crashes during bad weather.  While trying to assess if the island has a radio tower that can be used to signal help, they run into a group of pirates who threaten to kill them. Robin and Quinn escape initially and realize they need to get off the island if they want to survive.  They find an old World War II seaplane, and use the pontoons to attach to the broken wheels of the plane and take off just as the pirates fire on them.  Quinn however, is wounded during the escape, and passes out before landing the plane back on the resort island of Makatea.

Meanwhile, Robin’s fiance Frank and Quinn’s girlfriend Angelica, along with the residents of the island, are participating a memorial service on the beach when Quinn’s plane appears.  Robin crash lands in the water, but she and Quinn are safely rescued.  Robin and Quinn cannot deny the attaction they felt for each other while stranded, but Robin decides to return to NYC with her fiance.

While waiting for their flight home, Frank admits that he and Angelica slept together when he thought Robin was dead, and Robin doesn’t seem particularly upset, proving that the two aren’t really in love.  Quinn shows up at the airport to declare his love for Robin and sees her across the tarmac, having deplaned in hopes to finding Quinn too. 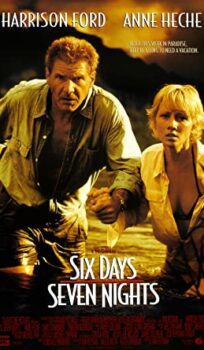