Gordon (William Sanderson) and Sarah (Tracy Griffith) follow the trail of toxicity to an abandoned mine, where they find a collection of mutant mosquito eggs. Ernie (Charles Napier), who was in league with crooked housing developer Drake (Jay Robinson) and who followed them there and knew of the toxic waste put in the mine by Drake, arrives and reveals his true colors to them. Before he can force them out at gunpoint, one of the mutant mosquitoes attacks him (he dies later on). Gordon escapes the mine with one of the eggs, but Sarah falls down a hole near the entrance into a pit. Gordon heads to the sheriff station and shows Roy (Jim Youngs) and Hank (Eloy Casados) the egg, and tells them that the nest was in the mine and that Sarah was trapped in there.

Before making a rescue attempt, Roy and Hank make a quick stop at Roy’s house, where Roy welds together a makeshift flamethrower. While they are there, Drake shows up, and- tired of Roy and Hank interfering with his shady operations –he orders his goons to kill them. Roy and Hank kill them all and head for the mine.

Roy and Hank enter the mine, save Sarah, and ignite some leftover mining explosives with the flamethrower, blowing the mosquitoes and their eggs to smithereens.

Hank and Sarah decide to leave town, due to Drake’s housing development project destroying the town’s old way of life, but Roy tells them he is staying behind, as he intends to fight Drake and his project until the bitter end. 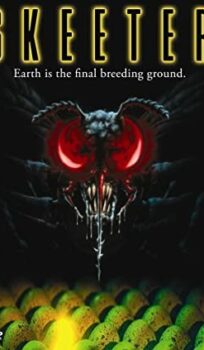