Just before the ski patrol squad of Snowy Peaks Lodge are about to do the safety portion of Inspector Crabitz’s (Deborah Rose) test, the traitorous ski school instructor Lance (Corby Timbrook) and his two fellow instructors execute their final act of sabotage for Maris (Martin Mull) by messing with the sights on the patrol’s howitzer. Therefore, when the patrol fires a shot from it, they wind up blowing a hole in the roof of a nearby shed. This garners the lodge its third and final citation from Crabitz and thus the loss of its lease with the park commission, and Crabitz declares that Snowy Peaks will be closed at 5:00 p.m. today. Later, at the main lodge, Pops (Ray Walston) gives a speech to all the ski patrollers where he gives them the bad news regarding the resort and says goodbye to them, and he adds that he has decided to sell the land to Maris. After he finishes, Maris – who is in attendance – tells everyone that they have half an hour to gather up their belongings and get off the mountain. After Maris walks off, Jerry (Roger Rose) tells Pops that he believes that someone has sabotaged them, and then Iceman (T.K. Carter) directs everyone’s attention to Maris chatting happily with Lance and the other ski instructors a distance away. Jerry tells Pops that he is certain that Maris, Lance, and the latter’s colleagues are the saboteurs, but he doesn’t know how to prove it. Pops replies that he is going to have a little talk with Maris and then leaves.

As Pops confronts Maris at a hot dog stand and accuses him of having sabotaged the mountain, the crazed skier Suicide (Sean Gregory Sullivan) engages in some downhill skiing wearing rocket-propelled skis. However, one of the rockets comes off his skis in the process, and it flies right into Eddie’s (George Lopez) shack full of explosives and blows it up. The resulting tremor causes a tree to fall right in front of the patrol director, Murray (Leslie Jordan), as he is snowmobiling down a trail, and when he veers to avoid it, he goes off the road and over the edge of a cliff. Thankfully, he saves himself from certain death by grabbing onto the cliff face, and he starts to call out for help. Also, the tremor makes Maris spill his coffee on his coat, but as he reaches into the hot dog stand with his left hand to look for some napkins to clean himself with, he accidentally hooks his sleeve onto a sink faucet, and then the stand breaks loose from its platform and goes sliding down the mountain, taking him with it. Jerry and the other ski patrollers see this from the lodge, so they, Pops, Crabitz, and Jerry’s bulldog Dumpster give chase on their snowmobiles. Along the way, they pass by the cliff that Murray went off of, and Stanley (Paul Feig) and Tiana (Tess Foltyn) hear his cries for help and stop to assist him. Tiana tells Stanley that she is going to traverse down to him, but after Stanley informs her that they don’t have the proper rig for that, he comes up with an idea to send Dumpster – who rode with them – down the ledges with a lifeline and give it to Murray. Dumpster successfully performs his task, and Stanley and Tiana pull him and Murray back up without trouble.

Meanwhile, the hot dog stand comes to a stop at the very edge of a cliff, but it is threatening to go over and send Maris to his doom. Jeff secures a rope around the stand’s flagpole and ties it to a tree, but Pops decides to take the lifeline and walk out towards Maris with it. He essentially tells Maris that he will only throw him the lifeline if he admits in front of Crabitz that he and the ski school instructors are to blame for all the incidents that led to Snowy Peaks losing its license, and when the flagpole begins to break away from the stand, the frightened Maris confesses to his wrongdoings and absolves the ski patrol of any blame. Pops throws the lifeline to Maris, and he gets out of the stand right before the flagpole pops out, which causes the stand to fall and smash to pieces on the ground far below. Crabitz takes Maris into custody and overturns her decision on the resort.

The ski patrollers then spot Lance’s associates taking off on a snowmobile with Lance being towed behind it, and after the ski patrollers accept that they cannot allow the trio to escape punishment, Eddie and Iceman hop onto another snowmobile so they can give chase. Before they go, they attach one end of a Thera-Band (a new, stronger type of elastic band that has been added to the First Aid kits) to the back of their vehicle and give the other end to Jerry so he can be towed behind them, and Jerry secures the band around his waist. Shortly into the pursuit, Lance breaks away from the others and goes skiing down another path, and when Jerry, Iceman, and Eddie show up moments later, Jerry has Iceman cut him loose so he can keep following Lance while Eddie and Iceman keep pursuing the other two instructors. Jerry takes a shortcut so he can get ahead of Lance and stops at a spot where there are a bunch of skinny trees around, and when he sees Lance heading his way, Jerry takes the loose end of the band and fashions a lasso out it, then throws it around Lance’s torso as he passes by him. However, though Jerry gets a tight grip on one of the trees in an effort to keep Lance from going any further, the tree breaks loose, and he starts getting towed right behind Lance. After a long and wild ride together down the mountain and through the mountain’s toughest run, the Hole in the Wall, Jerry notices that the elastic has managed to wrap itself around Lance’s left leg, so he yanks on it and makes him fall. Once Lance gets back up, Jerry cuts the Thera-Band from his waist, and the elastic snaps Lance hard in the chest and puts him down for the count.

Sometime later, Pops and the ski patrollers celebrate all things ending well for them, and Stanley is finally made an official ski patroller as a reward for rescuing Murray while Dumpster becomes the new mascot of Snowy Peaks. Jerry and his love interest (and Pops’ niece) Ellen (Yvette Nipar) then go off to ski the slopes together and share a kiss before doing so, and Suicide is shown stuck up in a tree from his rocket skiing stunt, but the branch soon gives way and he plummets to the ground. 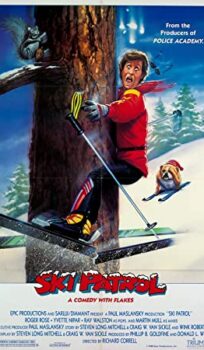