SHORT VERSION:
At Beth’s and Steve’s wedding ceremony, Dave and his friends finally enlighten Beth to Steve’s scheme to gain control of the mountain by marrying her and then using the power of his new position to banish her friends from it, specifically when Toddorbert shows her an eviction notice he earlier received that bears Steve’s signature. She orders Steve to get lost and then hits him hard a couple of times when he doesn’t comply, but he takes off running after she threatens to hit him again. Happy that she has avoided a major mistake, Beth celebrates with Dave and the rest of the congregation.

Dave casts aside his phobia of commitment and gets back together with Beth, and they ski down Death Row for the first time together and share a kiss after they wipe out.

LONG VERSION:
While conversing with his lackey Lee (Noah Heney) in the ski resort’s village, Steve (Brent Sheppard) reveals to him that, before Beth’s (Heather Campbell) father died, he conned him into signing a deal that states that he will get control of the entire mountain if he marries Beth, and Beth is completely unaware of this deal. However, unbeknownst to Steve, Tomcat (Will Sasso) is eavesdropping nearby, and he immediately goes looking for Dave (Dean Cameron) to tell him all about what he has heard. He locates him shortly after he has been punched out by one of Steve’s henchmen as a warning from Steve to not interfere in his wedding plans any further, and after bringing him back to consciousness, he enlightens him to Steve’s true reason for marrying Beth. Dave tells Tomcat that they have to do something about this because the wedding takes place tomorrow, and after Tomcat informs him that the bachelor and bachelorette parties are tonight, he tells him to concentrate on Beth and to not worry about Steve because “he will have his hands full”. Tomcat later approaches Lola (Wendy Hamilton) – a very attractive skier competing in the Spring Blast Ski Competition who is also an exhibitionist painter – and asks her to help him and his friends crash Steve’s bachelor party. She agrees to, but in return for her assistance, she has him set up a sexual tryst between her and his friend Alex (Doug Copithorne), whom she is attracted to.

Dave finds out that Beth’s friends have ordered a stripper from a strippergram service for her bachelorette party, which is being held at hers and Steve’s cabin, so he calls up the service and has the stripper sent to another location before going over to the party as the stripper himself. He later talks to Beth alone and tells her that he is ready to cast aside his phobia of commitment for her, and he finds out that she is feeling confused about the impending marriage. Meanwhile, Lola shows up at Steve’s party in a giant cake, and she seduces and handcuffs each of the attendees so they won’t give her any trouble and then sexually paints up Steve’s body. As she does so, Alex and Tomcat – who are hiding in the cake – take photos of the action through a peephole so they can later show them to Beth and spur her to call off the nuptials. Eventually, their constant squirming to watch Lola through the peephole causes them to bust out of the cake, but they and Lola manage to get away rather easily after she covers Steve with pillow feathers. Later on, a cop finds Steve wandering the streets in a disoriented state and clad in only his boxer shorts, and he takes him back to his and Beth’s cabin. Beth and Dave answer the door when they arrive, and when Steve makes a gesture indicating that he wants to strangle Dave, Beth deduces that Dave is responsible for his current condition and curses him for it. Though Dave tries to enlighten her about Steve’s real reason for tying the knot with her, she refuses to listen to him and orders him to get out of her life. Off-screen, Alex and Tomcat check out the pictures when they have developed and determine that they didn’t photograph anything that would definitely dissuade Beth from marrying Steve.

The next morning, Lee serves Toddorbert (Bil Dwyer) – the mountain’s maintenance engineer and another one of Dave’s friends – an eviction notice on Steve’s orders, since Steve has always wanted to get rid of him (though he later finds out that he was supposed to do that task AFTER the wedding), and Beth is matched up against Lola in the finals of the women’s mogul portion of the ski competition. After Lola tells her about what she did with Steve the night before but assures her that nothing serious happened between them, the irritated Beth proceeds to defeat her using none of the skills that Steve had been trying to teach her. Afterwards, Steve tells Beth that he is displeased with her for ignoring his advice, prompting her to drop a hint to him that implies that she knows what he got up to last night. Lola then comes up to them and restates that she and Steve didn’t get physical at all, and before she leaves their presence, she tells Steve that Beth is way too good for him. Having been watching Beth’s victory from afar, Dave decides that he needs to get serious about putting a halt to the wedding ceremony. He thus pays a visit to Toddorbert’s cabin while Alex and Tomcat are helping Toddorbert pack his things, and after they basically tell Dave that they have accepted that Steve has won, he encourages them to not give up and not let Steve take control of the resort and help him ruin the wedding.

The group’s first act of sabotage involves Toddorbert and Tomcat stealing Steve’s new car, forcing him and his henchmen/groomsmen to walk all the way to the church where the wedding is taking place and arriving late. After the ceremony gets underway, Dave and his friends disrupt it by pulling a few pranks, such as putting Alex’s and Tomcat’s pictures of Steve in all of the wedding programs to get the audience laughing during the minister’s opening passage and having Toddorbert sneak his way into becoming the ringbearer. Then, to top it all off, Dave gets on the P.A. system with a voice modulator and pretends to be God, and he tells Beth all about Steve’s scheme to gain control of the mountain by marrying her and then using the power of his new position to banish her friends from it. Though Lee finds and exposes Dave moments later and Steve professes his innocence, Toddorbert proves Steve’s true intentions to Beth by showing her his eviction notice, which clearly bears Steve’s signature. She angrily orders Steve to get out of here, and when he doesn’t, she drives her knee into his testicles and then sends him to the floor with a punch to the face. After she repeats her order to him while threatening to hit him again, he takes off running with his cronies close behind him (except for Lee, who stays behind because he has always been much less antagonistic than the others). Happy that she has avoided a major mistake, Beth celebrates with Dave and the rest of the congregation.

Dave and Beth restart their relationship, and the movie ends with them skiing down Death Row (which they never did together before now) and then kissing after they wipe out. 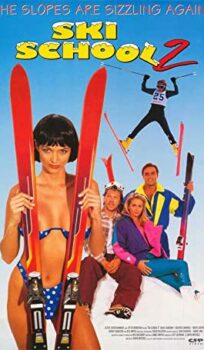