A commercial passenger plane is on route to Minneapolis.  A passenger (Susan Dey) finds a message written on the bathroom mirror stating there is a bomb on board, and demanding the plane be diverted to Anchorage. The crew and passengers try to determine which passenger is responsible. In Anchorage, Sgt. Weber (James Brolin) reveals he is the hijacker. Weber had lied about needing to get in that plane to make it to his sister’s wedding.  While Weber wears a military uniform, there is no record of a soldier by his name.  He has a gun and grenades.  He lets most of the passengers off, but requires some to stay on board (basically all the people the audience knows).  He has the plane refueled and demands to be flown to Moscow.

Soviet fighter jets intercept the plane, but allow it to proceed to Moscow.  Weber thinks he will be welcomed by the Russians, and treated as a hero and friend to them.  In Moscow, Weber shoots the captain (Charlton Heston).  When Weber leaves the plane, he is shot and killed by Russian soldiers.  Everyone else survives. 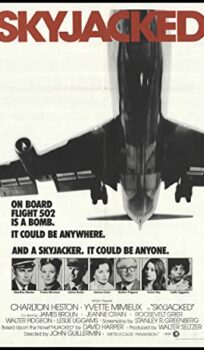