As Billy Pilgrim (Michael Sacks) continues to jump back and forth between different timelines, it is hard to define an “end” to the movie, but each of the main arcs are tied up nicely by the time the credits roll. World War II Billy is stuck cleaning up the wreckage of Dresden after the fire bombing, until he is rescued by Russian soldiers and returned to America. Present Billy accepts his fate as an attraction for the Tralfamadorians, and has a son with Montana Wildhack (Valerie Perrine), the porno actress chosen to be the Eve to his Adam. He eventually gains the time-viewing powers of the Tralfamadorians, allowing Billy to look back (and forward) on all the events of his life, which is why the movie has been presented in such a fragmented form.

Finally, Future Billy has become a widely-respected speaker back on Earth, speaking to sell-out crowds about the Tralfamadorian way of life. In his final speech, he reveals to the crowd that he is going to die that very night, but that they should not look at death as a bad thing, but as merely another event in the eternal flow of life. True to his world, as soon as he finishes his speech, Billy is shot down by Paul Lazzaro (Ron Leibman), who has finally, nearly fifty years later, made good on his promise to get revenge on Billy for the death of his friend during the war. 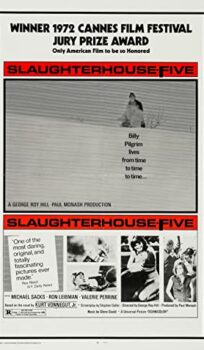