Martin (Patrick Bergin) eventually catches up with his wife Laura (Julia Roberts) -who now goes by the name of Sara Waters at her new location-, and invades her new house, leaving clues of his presence: cans and towels perfectly aligned and organized, and Berlioz’s eerie “Symphonie fantastique” playing on the radio.  At the same time she comes to terms with all this, her new love interest Ben (Kevin Anderson) knocks at her door; when she goes to open, she sees Martin’s reflection behind her.  He threatens to kill Ben if she doesn’t send him off, which she does -he notices something odd on her behaviour.

Ben realizes Laura is in danger and bursts in, getting into a fight with Martin, who knocks him unconscious and tries to kill him; Laura fakes agreeing with Martin so he doesn’t kill Ben, but then fights back and aims at him with the gun, after firing a warning shot; unimpressed, believing she wouldn’t dare, Martin moves towards her, but then stops frozen when she actually calls 911 and says: “Please come quickly; I just killed an intruder!”, after which she shoots him.

He falls to the floor and she collapses in tears; then, suddenly, he re-awakens, grabs her by the hair and shoots the gun on her with no effect, since she had emptied it on him; after this, he DOES drift off, dead.  Laura turns to help and embrace Ben, as the camera pans away from them and close to Martin, to show Laura’s wedding ring, shining on the floor, close to his hand. 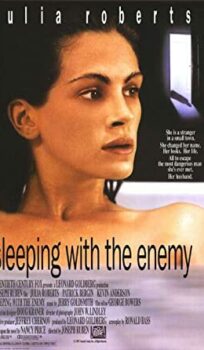