During their first date at the cemetery, Charles (Brian Krause) tries to take Tanya’s (Mädchen Amick) lifeforce away through kissing her, but she pushes him back because she couldn’t breathe. He then gets nasty, revealing his real self and tries to take her lifeforce away through force. She is able to flee him after jamming a corkscrew she brought along for the wine into his left eye and then slashing him with it.

Deputy Simpson (Dan Martin), who earlier tried to pull Charles over for speeding and passing a stopped school bus (and seemingly trying to run down a young school girl), happens to drive by the cemetery, and he sees Charles’ car there, now in its original state as he disguised it as a different car while with Tanya. When Tanya runs to him for help, Charles soon appears, and incapacitates Simpson. As Charles goes for Tanya, Simpson shoots him, but it doesn’t work and Charles just takes his gun and kills him with it. As Charles goes for Tanya again, Simpson’s cat Clovis leaps on him and nearly kills him by scratching him in the face and chest (cat scratches are the only thing that can harm or kill a Sleepwalker). He manages to throw Clovis down and drive away.

Charles heads home, badly injured and near death, and his mother Mary (Alice Krige) meets him at the door. When the police arrive at their house to arrest Charles, Mary makes them both invisible and thus prevents Charles from being taken away. Mary then goes to Tanya’s house seeking vengeance, killing her father and some cops and blowing up two cop cars with a revolver before taking Tanya in another cop car to her house.

Once inside, Mary brings her to Charles, now moments away from death. She resurrects him, and as Tanya is dancing with him against her will he tries to drain her lifeforce from her again. However, Tanya plunges her fingers into his eyes and kills him. Mary tries to stop her as she is doing so, but Clovis attacks her, and Sheriff Ira (Jim Haynie) breaks into the house and gets Tanya out of harms way. Ira tries to shoot Mary, but it has no effect, so he gets Tanya and makes a break for his cop car. Mary throws Ira aside and tries to get at Tanya in the car, but Ira attacks her, and he soon ends up impaled on the picket fence courtesy of her. As she goes for Tanya again, several of the many cats there jump on her and mercilessly claw at her, causing her to smoke and burst into flames and kill her.

The movie ends with Tanya cradling Clovis in the car as Mary burns in the driveway, and all the cats there take their leave. 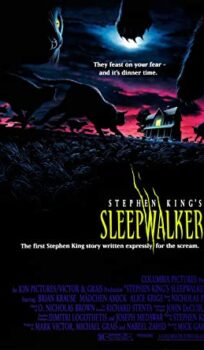