Sad-sack professor Lawrence (Dennis Quaid) apologizes to Janet (Sarah Jessica Parker), and they reconcile.
She later gives birth to twins, a boy and a girl.

Lawrence’s shiftless brother Chuck (Thomas Haden Church) moves in against Lawrence’s wishes and does his darnedest to loosen up Lawrence’s withdrawn and uptight daughter, Vanessa (Ellen Page). He succeeds a little too well when she makes a pass at him when drunk. He moves out for a while, but they eventually make their peace.

Lawrence’s snarky book is finally picked up by a non-academic publisher who edits it and markets it as a in-your-face novelty item. He allows this and decides to use the money to send Vanessa to the prestigious (and far-away) college she has been accepted into, thus letting her finally move on from fulfilling the role of Lawrence’s deceased wife.

Chuck continues to happily wander from job to job, but he has become part of the family. 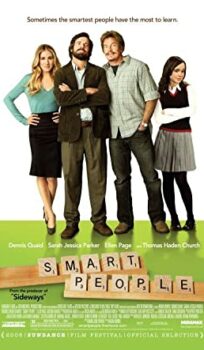