Bandit (Burt Reynolds) and Cledus (Jerry Reed) are hired by a pair of millionaires to bring 400 cases of beer from Texas to Georgia in 28 hours.  Along the way they pick up a runaway bride, Carrie (Sally Field), and are pursued by law enforcement Sherriff Buford T. Justice (Jackie Gleeson) and his jilted son.

As they approach Atlanta with the beer it seems that they won’t make it on time and will be arrested, but Cledus high tails it to the fairgrounds where the millionaires are waiting with their reward.  They offer the trio double or nothing to get some clam chowder in Boston in 18 hours.

Bandit, Cledus and Carrie take them up on their offer and the chase starts all over again with Justice in hot pursuit. 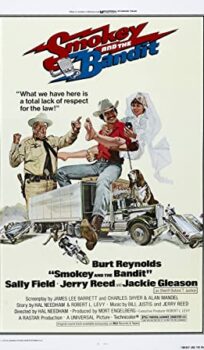