The snow day focuses mainly on the Brandston family: Tom (Chevy Chase), a meteorologist for an unpopular TV station who has a huge shadow cast over him in the form of Chad Symmonz (John Schneider), a more popular meteorologist on a rival station who is really a fraud, his wife Laura (Jean Smart), a woman juggling motherhood with a hectic corporate lifestyle with seemingly no time for fun, and their children: Son Hal (Mark Webber), daughter Natalie (Zena Grey), and youngest son Randy (Connor Matheus).

Hal’s friend, Lane (Schuyler Fisk), is secretly attracted to him, but some time after another one of Hal’s attempts to get his dream girl Claire (Emmanuelle Chriqui) fails, a frustrated Lane kisses him, revealing her feelings for him, but walks away angered because of everything Hal put her through in his quest for Claire and not seeing she had feelings for him. Hal meets Claire later on at a swimming pool, and she kisses him, but Hal soon tells Claire that while this was great, it wasn’t the “snow day feeling” he was hoping for, and he tells her Lane kissed him. He, and Claire, understands what he has to do now.

Tom exposes Chad for the fraud he is by making him try to explain where snow came from in front of a pro-Chad crowd. Chad gives a non-sensical, incorrect answer, and the crowd turns on him. Tom also has Chad give him his due credit on live television for covering the snowfall first, and Tom officially becomes the town’s top meteorologist.

Randy manages to coax Laura away from her busy lifestyle to get her to play in the snow with him for most of the day, and she rediscovers what it truly means to be a mother.

Roger the Snowplowman (Chris Elliott) whom Natalie had been spending the day trying to stop from plowing all the streets so she could achieve her dream of a second consecutive snow day arrives at his final street to plow, but Natalie steps into his path, still determined to stop him. She summons forth an army of hockey stick-wielding kids she collected, and the kids charge him and tie him to a Caution: Children Playing sign. Roger laughs at them, saying he already won because he plowed all the other streets, assuring their return to school the next day. However, he is soon informed that they intended to unplow the streets to assure that they will have another snow day, and they commandeer his snowplow and take off.

As Hal arrives at the town’s outdoor skating rink to talk to Lane, his rival for Claire, her ex-boyfriend Chuck (David Paetkau), attacks him angrily. But, before Chuck can seriously harm him, Natalie drives in with the snowplow and immobilizes Chuck in a huge heap of snow. After talking with Hal and re-establishing their sibling bond, Natalie soon takes off with her friends to successfully unplow the streets, and Hal speaks with Lane and wins her over, kissing her and spending the remainder of his night with her. 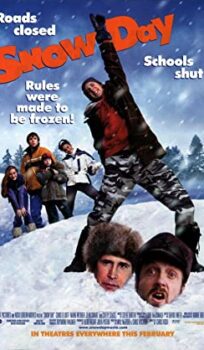