POOPER
Lilli, Will, and Doctor Gutenberg go to the castle to rescue Frederick and confront Claudia. After Will gets Frederick out of the castle, Doctor Gutenberg is pushed out of a window to his death by Claudia, who then fights Lilli. During the fight, Lilli accidentally sets the bedroom on fire. The fire causes Claudia’s resurrected baby to cry out, distracting her. This allows Lilli to stab the mirror, wounding both Claudia and her reflection. Claudia then is caught in the fire, killing her and the baby, which also destroys the mirror, killing the reflection. Lilli escapes the burning castle, where Frederick and Will are reunited with her.

LONG VERSION
Nobleman Frederick Hoffman (Sam Neill) and his pregnant wife Lilliana are involved in a carriage accident that leaves her mortally wounded. Before she dies, she tells Frederick to cut the baby girl out of her and take care of her, which he does. Years later, the young girl, named Lilli after her mother, is living with her father at his castle. One day, a noblewoman named Lady Claudia (Sigourney Weaver) arrives, and Frederick announces that they are to be married, but Lilli takes an immediate disliking to the woman who is replacing her mother. Throughout the day, Claudia is kind to her, but Lilli wants nothing to do with her and hides under the bed in Claudia’s room. A nursemaid goes in looking for Lilli, but she is distracted by the mirror Claudia brought with her and is killed by an unseen force inside it.

Years later, a now-teenage Lilli (Monica Keena) is preparing for a ball thrown by Frederick celebrating the upcoming birth of her half-brother. Claudia wants her to wear one of her old dresses, but she rebuffs her and chooses to wear one her mother once wore. At the ball, Frederick tells Lilli that she now looks just like her mother when she was her age. Claudia, hurt by what Lilli did and Frederick said, goes into early labor, and the baby boy is stillborn. The Hoffman’s personal physician Doctor Gutenberg (David Conrad) tells them that Claudia will survive, but she’s no longer able to bear children. That night, a distraught Claudia begins talking to the force inside her mirror, which takes the form of her reflection. As the night progresses, she becomes more and more corrupted by the power of her reflection, and more and more convinced the death of her baby was Lilli’s fault. The next day, Lilli, full of remorse following last night’s events, goes to Claudia for forgiveness. Claudia forgives her, but then tells her feeble brother Gustav to go ahead with the plan she came up with last night. Gustav follows Lilli to the garden and tries to kill her, but Lilli escapes into the forest. Unable to face his sister after failing her, Gustav kills a boar and cuts out it’s heart, then gives it to Claudia, claiming it was Lilli’s. Later, Claudia realizes the heart did not come from Lilli, so she casts a spell on Gustav, and he kills himself. Claudia then cuts out Gustav’s heart, and tells her reflection she may need it later. Meanwhile, Frederick learns that Lilli is missing and goes to look for her. Not wanting him out of her sight, Claudia then casts a spell on Frederick’s horse, causing it to fall over dead, which leads to Frederick breaking his leg. Claudia then takes Frederick back to the castle to “take care of him”.

Lilli, still hiding in the forest, comes across a group of miners, one of which is a dwarf. The leader of the group, Will (Gil Bellows), reluctantly allows her to join them while they work in a nearby gold mine. All the while, a crow has been following her. Claudia, with the help of her reflection, sees Lilli enter the mine through the eyes of the crow and uses a spell to collapse it. She and the others escape, but one of the miners is crushed to death. While walking back to their home, Claudia unleashes another spell to get the trees to fall on her. They escape again, but another one is killed by a falling tree. Another miner sees the crow and kills it by throwing a rock at it. Claudia then decides to take matters into her own hands and, disguised as an old woman, goes into the forest to find Lilli. At the miner’s home, while the surviving miners are mourning their lost friends, Lilli and Will begin to talk and soon they develop feelings for each other, and later share a kiss.

The next day, Lilli is walking in the forest to get water from the nearby river when she sees Claudia, still disguised as the old woman. They start talking, and Claudia gives Lilli an apple, which was actually Gustav’s heart that she turned into an apple and cast a spell on it. Lilli takes a bite into it, and immediately falls over. The spell paralyzes Lilli, but anyone seeing her will think she is dead. Later, Will and the miners, looking for Lilli when she didn’t return, come across her body. They get Doctor Gutenberg, who pronounces her dead and they start planning her funeral. Lilli is put in a glass coffin they happened to have and is being placed in the ground when Will sees her eyes open. Realizing she is still alive, Will opens the coffin and gets Lilli to start breathing again, which she does after spitting out the piece of apple caught in her throat. Back at the castle, Claudia has placed a spell on all of the people working at the castle, so they will do as she says. She has also gone to the reflection and asked how to resurrect her dead baby. It tells her she needs the seed and blood of Frederick. She promptly has sex with Frederick, then has him tied to an upside-down crucifix and will perform a ceremony that is borderline Satanic.

A fully recovered Lilli learns about what happened to her father from Doctor Gutenberg, so she wants to return to the castle to rescue him and stop Claudia. Will agrees to help her, and Doctor Gutenberg will join them as well. At the castle, Claudia has completed the ceremony and has successfully resurrected her stillborn son, but the child may be demonic. Lilli, Will, and Doctor Gutenberg arrive at the castle, and they quickly find Frederick. Will takes him out of the castle while Lilli and Doctor Gutenberg separately look for Claudia. While Lilli is fighting off the castle workers who are trying to stop her, Doctor Gutenberg finds Claudia. She proceeds to push him out of a window, and he falls to his death. After fighting off the workers, Lilli confronts Claudia in her bedroom. She sees Claudia placing the baby in a cradle, and they begin arguing with each other. They then fight, during which Lilli accidentally knocks over a candle, setting the room on fire. The fire causes the baby to cry out, which distracts Claudia. Lilli then sees the reflection in the mirror, and figures out it is enchanted with an evil spirit, so she stabs the mirror with a knife, which causes both Claudia and the reflection to be wounded. The injured Claudia then picks up the baby, just as she catches on fire. As Lilli runs out of the room, Claudia and the baby are engulfed in flames, and they are killed. The fire also destroys the mirror, killing the reflection in the process. The movie ends with Lilli escaping the burning castle, and she is reunited with Will and Frederick. 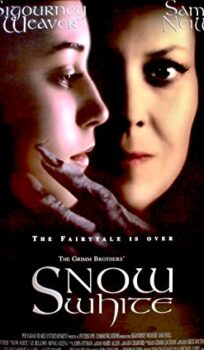