The Solarbabies – Jason (Jason Patric), Terra (Jami Gertz), Rabbit (Claude Brooks), Metron (James LeGros), Tug (Peter DeLuise), and Daniel (Lukas Haas) – track down a now-remorseful Darstar (Adrian Pasdar) to Tiretown and reclaim Bodhi from him. When Terra asks him why he took Bodhi, he replies that he thought it could do magic for him like it did for her and the others, but he knows now that Bodhi is something other than magic. Shortly afterwards, the Eco-Protectorate’s E-Police storm into Tiretown, and as the Solarbabies and Darstar flee through a tire melting facility, Daniel accidentally drops Bodhi and is unable to retrieve him. Darstar gets the sphere soon after, but the E-Police appear and capture him. Terra gets separated from the group and is then taken away by an unseen person, after which the facility explodes, leaving her friends to think that she died in the blast. Darstar and Bodhi are taken to the Eco-Protectorate’s aqua bunker, where Darstar is caged up and Shandray (Sarah Douglas) and Grock (Richard Jordan) begin working on destroying the sphere along with Shandray’s robot Terminack.

The next day, the bounty hunters Malice (Alexei Sayle) and Dogger (Bruce Payne) catch the Solarbabies intending to turn them in for extra water privileges, but as they make their journey, Terra suddenly shows up with a small army of white-cloaked warriors, and they free her friends and send Malice and Dogger away. She and the warriors then take the Solarbabies to a hidden oasis populated by former Eco-Warriors and their families and under the leadership of Greentree (Frank Converse), who is Terra’s long-lost father, and he welcomes them into the community (the person who kidnapped Terra was one of two Eco-Warriors who saw her in Tiretown and recognized her hand tattoo as being identical to the symbol on Greentree’s pendant). However, he states that the Eco-Warriors are hesitant to take up arms and fight the Eco-Protectorate again, since the past Eco-Wars took a great toll.

That night, Jason and Daniel get to chatting, and when Daniel worries that the Eco-Protectorate may have killed Bodhi since he doesn’t hear him calling anymore, Jason assures him that they will not give up until they get Bodhi back. He then tells Daniel that Bodhi once showed him a vision where they were heading for a place they haven’t found yet (to be exact, Bodhi showed him a vision of him and his friends attacking the aqua bunker and releasing all of their water into the world), so that is a sign that things aren’t over yet. Later on, Jason talks to Terra and tells her that they have to go on, but she says that it is better to forget Bodhi and remain here. Suspecting that she knows something, he questions her as to why she is saying this, and she replies that Greentree told her that his men learned that Bodhi was taken to the aqua bunker and the Eco-Protectorate are going to destroy it. Remembering his vision, Jason declares that that won’t happen if they can help it. Later on, the Solarbabies sneak out of the oasis and head for the aqua bunker, taking with them an illustration of the bunker’s layout plan.

Clad in their skateball gear, the sextet infiltrates the bunker, but not quietly; they find themselves evading the guards at almost every turn as they search for Bodhi. Along the way, they find Darstar and free him. They soon enter the control room where Bodhi is being held, and they use their sticks to beat up Grock, Gavial (Pete Kowanko) (the leader of a skateball group that rivals the Solarbabies), and the guards. They also blind Terminack, who thereafter strikes and damages one of the computers, triggering a yellow alert and causing a total malfunction on all circuit controls. Daniel frees Bodhi, but then Shandray confronts him and tries to take the sphere from him. Bodhi responds by setting her hands ablaze, and as she reels in agony, she grabs a control panel and electrocutes herself. Grock then grabs hold of Daniel, but Terminack soon gets Grock’s left arm in a crushing grip and makes him release the boy. Gavial tries to free Grock by shooting Terminack in the head, but the shot makes the head explode and Grock is accidentally killed as a result. A red alert then comes up with orders to evacuate, and Bodhi turns into a stream of energy and shows Daniel the way out, so he yells for his friends to follow him. Gavial ends up running off for parts unknown, and the protagonists escape the bunker and get on top of a hill to watch all of the water bust out of the bunker and go back out into the world. With the water now free, they get treated to the sight of their first-ever thunderstorm.

Bodhi heads back into outer space, but he leaves a part of himself behind in each of them, including Darstar, to show that he will always be with them. The movie ends with the gang going for a celebratory swim in a newly-formed ocean and Jason sharing a kiss with Terra. 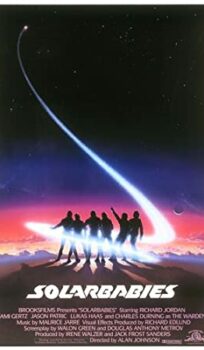