On the evening of her 30th birthday Rachel (Ginnifer Goodwin) sleeps with her best friend Darcy’s fiancé Dex (Colin Egglesfield).  Rachel and Dex initially regret their actions but come to realize that they have had feelings for each other for 6 years, when they first met in Law School.  Darcy (Kate Hudson) is a very selfish and vivacious woman and is too self-absorbed to notice anything going on between Rachel and Dex.  When Rachel finally confesses her love to Dex and asks him to call off the wedding, Dex tells her he can’t (from family pressure to marry Darcy).  Heartbroken, Rachel flees to the U.K. where her good friend Ethan (John Krasinski) has moved.  Ethan confesses that he has always had feelings for Rachel but knew they weren’t meant to be after she fell for Dex.

Rachel decides to return home and go to Dex and Darcy’s wedding.  When she arrives at her apartment, Dex is waiting and tells her that he called off the wedding.  When Darcy shows up at Rachel’s apartment, Dex hides while Darcy reveals that she has been cheating on Dex with Marcus, a close friend of his, and is pregnant with his child. Relieved that the wedding is called off, Darcy goes to leave but notices Dex’s coat in Rachel’s apartment. Darcy figures out what has been going on and the exes confront each other.  Darcy tells Rachel she never wants to see her again.

Two months later, Rachel and Dex are happily a couple and Rachel runs into Darcy on the street. She is 2 months pregnant and claims she has never been happier but it is unclear if the two will reconcile their friendship.

…after the credits role there is an additional scene:  Ethan is walking on a street in London when he hears Darcy’s calling his name. She has come to visit him and he tries to act like he hasn’t seen her.  To be continued…

(As is my standard caveat, read the books!  “Something Borrowed” and “Something Blue” from Emily Griffin were both outstanding.) 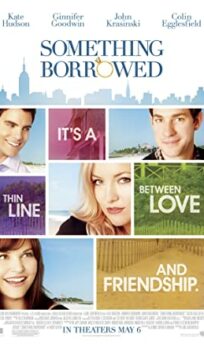