Richard (Christopher Reeve) finds a “modern” coin in one of his pockets, and the hypnotic effect is destroyed. He finds himself once again in the present and unable to return to Elise (Jane Seymour), who will grow to an old and eccentric spinster waiting to see him again. Richard stays at the hotel pining for her, and contracts pneumonia. Despite the hotel doctor’s efforts, he dies and is reunited with his true love–and he’s wearing that awful suit and bowler hat, even in Heaven.
Thanks, MC, who remembered the last few moments that I had forgotten. 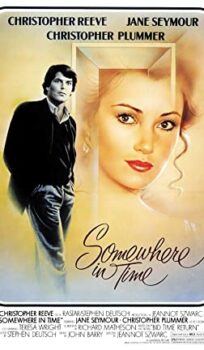