POOPER
Uncle Remus decides to leave the plantation after Sally tells him to stay away from Johnny. Johnny chases after him, but is injured while doing so. The injuries cause his father John Sr. to come to the plantation. Uncle Remus tells an unconscious Johnny about Br’er Rabbit and The Laughing Place, which gets Johnny to wake up. John Sr. decides to stay at the plantation. At the end of the movie, Johnny and the other kids meet Br’er Rabbit and the rest of the characters from his stories.

LONG VERSION
Set in post-Civil War Georgia, Johnny (Bobby Driscoll) is going to his grandmother’s plantation with his parents, but is distraught when he learns his father won’t be staying with them, and instead is returning to Atlanta to work at his newspaper. Johnny plans on running away back to Atlanta, but his plans are interrupted when he hears the voice of Uncle Remus (James Baskett) telling stories to little children about Br’er Rabbit. With other plantation workers looking for him, Johnny evades them but is caught by Uncle Remus. He takes Johnny back to his cabin, where he tells a Br’er Rabbit story about running away from home, but changes his mind after dealing with his rivals, Br’er Fox and Br’er Bear. Heeding the advice, Johnny decides to return to the plantation.

As time goes on, Johnny soon befriends Toby (Glenn Leedy), the son of a plantation housemaid, and Ginny (Luana Patten), the youngest child of poor neighbors. Ginny recently got a new puppy, but her brothers Joe and Jake threaten to drown it, so she gives it to Johnny. Johnny’s mother Sally (Ruth Warrick) refuses to let him keep it and demands he return it, but Johnny decides to give it to Uncle Remus. Soon Uncle Remus is telling the kids another Br’er Rabbit story, this time how he uses reverse psychology to fool Br’er Fox and Br’er Bear. As they are leaving the cabin, Joe and Jake confront Johnny about returning the puppy. Johnny uses reverse psychology and tells the brothers not to tell their mother about the dog. They fall for it and immediately tell her, and get in trouble. Knowing they got tricked, the boys tell Sally that Johnny took their puppy and Uncle Remus has it. Sally then goes to the cabin and demands that Uncle Remus return the puppy himself and to stop telling Br’er Rabbit stories to Johnny.

A week later, it’s Johnny’s birthday and his mother is throwing him a party. Johnny goes to pick up Ginny, but her brothers push her into a mud puddle, ruining her new dress. As she runs off crying, Johnny fights the brothers to defend her honor, but the fight is broken up by Uncle Remus. Johnny then runs to Ginny and tries to comfort her, saying he doesn’t want to go to the party either since his father won’t be there. Seeing the two kids distraught, Uncle Remus can’t help himself and tells them yet another Br’er Rabbit story, this time about finding their Laughing Place (where someone goes to feel better). With their moods brightened, Uncle Remus takes the kids back to the plantation, only to find out the party has ended. Sally is angry at Johnny for missing his own party, and she blames Uncle Remus. She tells him that he is just confusing her son with those stories, so she doesn’t want him to spend any more time with Johnny.

The next day, Uncle Remus, saddened that his stories and good intentions are viewed as bad things, decides to leave the plantation. Johnny sees Uncle Remus riding off in his cart and asks his mother why he is leaving. Sally, now realizing how much Uncle Remus means to Johnny, admits she drove him away and apologizes for her words, but Johnny just wants him to come back. He chases Uncle Remus through a pasture, where he is attacked by a bull and gets injured and knocked unconscious. His injuries are serious enough for Johnny’s father, John Sr. (Erik Rolf), to come to the plantation from Atlanta. John Sr. tries talking to his son, but the delirious Johnny only calls out for Uncle Remus. He comes into the room, and he tells Johnny more about the Laughing Place. Hearing the story causes Johnny to wake up, much to his parents’ relief. John Sr. then tells Sally that he has decided to stay at the plantation.

The movie ends some time later, with Johnny singing “Zip a Dee Doo Dah” (the Oscar winning song that is sung throughout the movie) along with Toby and Ginny. The puppy is running along with them, so he obviously never gets drowned. Uncle Remus is nearby humming along to the song when he hears the voice of Br’er Rabbit. The rabbit is speaking to the kids and Uncle Remus quickly joins up with them, along with other characters from the Br’er Rabbit stories, and they all skip along the path while singing the song. 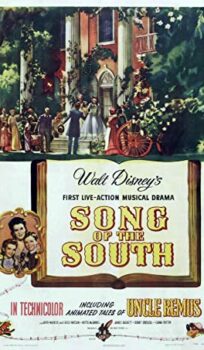