A remake of Henri-Georges Clouzot’s Wages of Fear

Roy Scheider is the sole survivor of a crew that robbed a church bingo game.

The head priest, who was shot, has a brother who is a gangster and wants Scheider really bad.

Bruno Cremer is a French Banker who committed fraud.

Amidou is an Arab Terorist running from the Israelis.

Francisco Rabal is a mystery man who we see assassinate a man in Mexico.

These four men wind up hiding in a wretched Central American village. An oil well fire creates the need for 4 men to drive two trucks with unstable dynamite over treacherous jungle roads. Bruno Cremer and Amidou blow a tire and get blown up. Roy Scheider and Franciso Rabal get waylaid by bandits. Rabal shoots the bandits but is fatally wounded. Scheider goes on but his truck breaks down close to the oil well fire. He then carries a case of dynamite by hand and is paid all 4 shares, 40,000 pesos.

At the end of the film we see two hitmen (sent by the gangster after Scheider) arrive at the village. 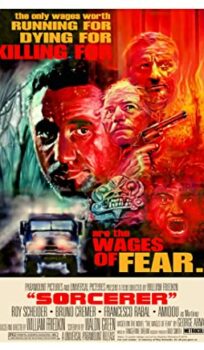