Dave (Barry Watson), Adam (Michael Rosenbaum), and Doofer (Harland Williams) come to understand how wrong they were in mistreating D.O.G. all the time, so they work to build the self-esteem of its members, culminating with them defeating their rivals the Tri-Pis at a touch football game. When D.O.G. is denied entrance onto the “K.O.K.-tail Cruise” despite their victory, Doofer steals a boat and brings everyone on board the cruise ship, and they snatch the Tri-Pis away and send them out to sea on a life raft.

However, when Dave’s father and Mr. Kloss (Mark Metcalf) are preparing to throw Leah (Melissa Sagemiller) overboard because she slapped Kloss when he came onto her, Dave is forced to blow his cover as Daisy to save her, shocking her and everyone else. Adam also reveals himself shortly afterward when Jimmy (Tony Denman) attempts to come on to him again, and Doofer is discovered and revealed by Spence (Brad Beyer).

D.O.G. is sent back to shore, and Spence puts the trio on trial for the theft. After Dave criticizes K.O.K. for how they treat D.O.G. like garbage, Doofer produces a videotape he found on board that he says contains proof that Spence is the real thief (though he doesn’t know for sure). The tape is played, and it initially shows Adam having sex with a girl, but then it shows Spence robbing the safe (which he did and framed the trio for because he felt they had humiliated him one too many times). Spence subsequently loses his future job with Kloss as well as his K.O.K. presidency and membership.

The trio is welcomed back into K.O.K., Adam is elected to succeed Spence as president, and K.O.K. work on becoming better men. However, Dave decides to quit. He heads back to the D.O.G. house to talk to Leah, and tells her that while he did not expect her to forgive him for deceiving her, he wanted her to know that meeting her has changed his life. Some time later, at a social event where K.O.K. is meeting and mingling with D.O.G., Dave and Leah chat again. She basically accepts his apology, and they kiss.

The last scene shows the Tri-Pis still floating on the life raft. 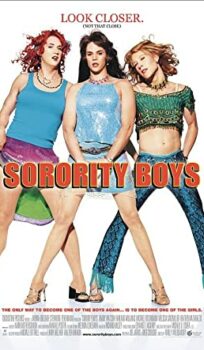