When D.J. (Brian Hooks) and Cherry (Sommore) come into the cockpit to have some sexual fun, they discover that Captain Mack (Snoop Dogg) is apparently dead, due to him eating a bunch of African mushrooms that his co-pilot Gaeman (Godfrey) brought on board to use to treat his pubic lice. This news spreads like wildfire and the passengers panic, and Giselle (K.D. Aubert) goes into the upstairs club and finds Nashawn (Kevin Hart) and tells him all about what has happened. Nashawn decides that Gaeman must take over flying duties, so he finds him while he is relaxing in the hot tub with some women and gives him the order. Unfortunately, Gaeman slips and falls when he gets out and knocks himself unconscious. Giselle tells Nashawn that he must find a way to land the plane, so he tells her to meet him in the cockpit and then departs. Muggsy (Method Man) – clad in full parachuting gear – stops Nashawn along the way and tries to convince him to take a parachute and leave with him, but Nashawn tells him that he is going to stay and deal with this problem.

Nashawn meets with Giselle at the cockpit door just as the club’s bouncer is carrying out Mack’s body, and before they go in, Nashawn – feeling the need to say this in case things go wrong – makes a confession to Giselle: The night they broke up, he was standing on her porch when he overheard her and her father arguing about her refusal to attend New York University on a full scholarship because she wanted to stay with him. He decided that he couldn’t let her throw away her future for him, so that was why he ended their relationship. He then apologizes for hurting her and adds that leaving her was the biggest mistake of his life, but he has never stopped loving her. She smiles and touches his face, but then they get back into a serious state of mind and enter the cockpit.

After an attempt to call for help fails, Muggsy suddenly jumps into the co-pilot’s chair, having opted to help Nashawn out of this jam. Elvis (Tom Arnold) and Jamiqua (Mo’Nique) then come in and offer nothing helpful, resulting in everyone arguing, but then Blanca (Sofía Vergara) enters and says that they need to disengage the auto-pilot and take control of the plane. She explains that she used to date a pilot and had sex with him multiple times in the cockpits of the planes he flew, and since they most often did it during the descent, she committed the landing procedure to memory. With her knowledge and a lot of luck, Nashawn manages to land the plane in the middle of Central Park in New York City. After he, Giselle, Muggsy, and Blanca finish checking on the passengers, he invites everyone up to the club so they can celebrate this successful landing.

Afterward, Nashawn narrates that he and Giselle are dating again, but they have decided to take it slow this time (even though the last shot of them shows them beginning to go to town on each other).
He also reveals what became of some of the others: 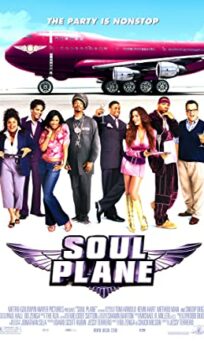