Pooper:
Joe is able to save 22 from becoming a lost soul and helps 22 journey to Earth to start life. The Jerrys, impressed with Joe’s work, allow him to return to life (which he no longer takes for granted).

Long Ending:
Joe (voiced by Jamie Foxx) is a middle-aged, African-American, pianist who has begrudgingly taken a job as a middle school jazz band teacher. Although he inspires his students, Joe still dreams of being a successful jazz performer. Joe is excited when a former student named Curley (voiced by Ahmir-Khalib Thompson aka Questlove) calls him and says there is an opportunity for him to play piano at a show the next night with a famous jazz saxophonist named Dorothea Williams (voiced by Angela Bassett). Joe nails the audition and gets to join her for the gig the next night. Excited that this could be his big break, Joe fails to notice an open manhole cover on his walk home and falls through it to his apparent death.

Joe suddenly awakens as an intangible spirit on an escalator heading towards a big light. Joe is now a soul…. on its way to “the Great Beyond.” Realizing he must have died in the fall and not ready to accept his fate, Joe panics and manages to jump off the escalator before he is taken into the light. Joe tumbles into a realm called “the Great Before” where new souls are given personalities before they are born. The entities in control of this realm – all of whom are named “Jerry” – believe that Joe is a mentor (i.e., a soul sent to prepare the newly created souls to be born on Earth). Thus, they let him stay in their realm. Meanwhile, a cosmic entity named Terry (voiced by Rachel House) realizes that the “count” of people going to the Great Beyond is off by one person and begins to investigate the situation.

Joe unsuccessfully tries to escape to Earth. He soon realizes that souls can only journey to Earth if they earn an “Earth badge.” After being imbued with their personality traits, a soul earns an Earth badge once they encounter the thing that inspires them to live. Joe decides to play along and mentor a new soul, in hopes of helping them obtain an Earth badge and then taking it so he can return to his body (which is in the hospital). He is assigned to mentor a soul named 22 (voiced by Tina Fey), who has refused to journey to Earth for centuries. 22 explains that it has no interest in being born despite the mentorship of hundreds of luminaries such as Copernicus, Lincoln, Muhammad Ali, and Mother Teresa. 22 also notes that having not been born, it’s soul hasn’t chosen a race or gender.

22 is willing to give Joe the Earth badge so it can remain in the Great Before. As they bond, the pair journey to a place called “the Zone,” i.e., the place where people’s souls journey when they are doing something on Earth that they love and excel at. Also in the Zone are “lost souls,” i.e., monstrous beings who become too obsessed with Earthly desires that they forget how to appreciate their life. Also traveling the Zone are some still-living souls that can travel from their Earthly bodies to the Zone via meditation. These souls are captained by a man named Moonwind (voiced by Graham Norton), who patrols the Zone in an attempt to rescue the Lost Souls and return the souls to their Earthly bodies. Moonwind is able to help Joe open a portal back to his body. In his rush to return in time for his performance, Joe knocks 22 into the portal as he goes through. By accident, 22 ends up in possession of Joe’s Earthly body and Joe’s soul ends up in the body of a cat. Dorothea stumbles upon Joe and 22 in confusion and thinks Joe is unstable. She fires him from the gig. But Curley says that if Joe can pull himself back together before the show, Dorothea may reconsider.

Joe and 22 find Moonwind’s body on Earth. He says he can restore them to their proper bodies when the universe aligns properly later that evening. Joe and 22 go on many comical misadventures while waiting for the time for the switch. In Joe’s body, 22 gains a love for nature, food, friendship, family, and music. The pair even manage to get Dorothea to give “Joe” another chance. In this time, however, 22 gains a desire to live. 22 therefore decides not to relinquish Joe’s body. Joe tries to force 22 to give it up, saying 22 only desires life because it inhabited his body and memories. During the conflict between them, Terry locates the pair and forces their souls back to the Great Before. When they return, 22 finds it has earned the Earth badge. Believing Joe’s claim that his body was responsible for the badge’s creation, 22 gives the Earth badge to Joe before flying to the Zone.

Joe uses the Earth badge to return to his body. He plays the show with Dorothea and the crowd goes wild. His dreams are realized when Dorothea invites him to be a full-time member of the band. However, Joe feels unfulfilled by his accomplishments. Joe realizes that 22 brought an appreciation for life to his body, not the other way around. He returns home and plays the piano until his soul enters the Zone. There, he finds Moonwind. The two discover that 22, believing it isn’t good enough to live, has become a lost soul. The now-monstrous 22 crosses into the Great Before and wreaks havoc. But Joe is eventually able to rescue 22 and return it to normal. He then returns the Earth badge to 22. With Joe’s encouragement and support (the first time a mentor has given such things to 22), 22 journeys to Earth to start a new life. The Jerrys and Terry then transport Joe back to the escalator to the Great Beyond.

Before Joe reaches the Great Beyond, one of the Jerrys appears before his soul. The Jerry says that the Jerrys were impressed with his work with 22, and as a reward, offers to restore him to life. Joe takes the offer. When he awakens in his body, he ventures out into the world. But now, he has a true appreciation for the gift of life and all it has to offer. 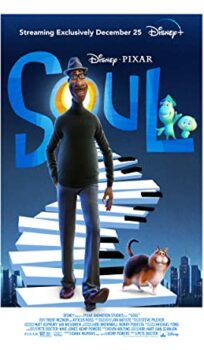