Ruben Stone (Riz Ahmed) is a recovering addict and a drummer for a heavy metal rock band called Blackgammon with his girlfriend Lou (Olivia Cooke). He suddenly has an extreme loss of hearing, and continues playing in the band despite his doctor’s advice, and loses all his hearing.

Ruden goes to a program run by Joe (Paul Raci), to help stay sober and learn to live with being deaf. Ruben learns to live there, but desperate to reunite with Lou, he gets a cochlear implant and is asked by Joe to leave the facility.

The implant works to an extent – sound is very static and hard to hear but it’s more than nothing – and he goes to Paris to reunite with Lou. They both realize that their relationship is a thing of the past, and part on sad but good terms.

Ruben sits alone on a bench and removes the device from his head, choosing instead to sit in the silence. 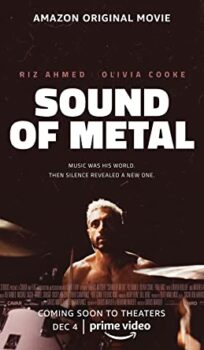