It is 1971, and a platoon of Louisiana national guardsmen is sent out on a military exercise in the swamps.  They have to cross a remote wilderness to meet with other troops.  Among them is Private Stuckey, an obnoxious young loudmouth with the bad habit of firing blanks at other people to scare them.

As they make their way through, they come across a camp of some backwoods cajun hunters.  To avoid long hikes through chest deep water, they decide to steal the canoes.  As they are paddling, the cajuns return to camp and yell at them.  Stuckey fires blanks.  The hunters don’t know it is blanks, and fire back with live ammo.  The commanding officer is killed. In their panic to reach shore, they overturn the canoes and lose the map, compass and most of their supplies.

They now have to reach safety, with the cajuns hunting them.  They have only 4 live bullets each, and the rest are blanks.  They find a cajun cabin, and take a man prisoner.  They are convinced he is the one who killed their commander (he is not).  Private Coach goes nuts and burns down the cabin, calling himself an avenging angel.  The others are upset that they have again lost a supply of food and ammo.  They take the cajun captive and drag him with them.  One by one, men are killed off.  Tyrone is crushed in a bear trap. Reece (Fred Ward) tries to kill the cajun captive.  Hardin kills Reece to stop him, and the captive escapes.  Stuckey sinks in quicksand. Seales, Caspar and Poole are all shot. Coach is hanged.

Finally, Spencer (Keith Carradine) and Hardin (Powers Boothe) are the only 2 left alive.  The cajun captive re-appears.  Since Hardin saved him, he tries to help them and shows them the way to the nearest road.  He warns them that others will definitely kill them.  On the road, a pickup truck with a couple comes by.  They offer the soldiers a ride to town, but it turns out to be a tiny cajun village with no phone.  The cajuns are holding a festival.  The man offers them a ride out of the swamp, but not until after the festival.  Hardin is paranoid and afraid of everyone.  Spencer is drinking beer, dancing and enjoying the festival.  Hardin sees a canoe arrive with the hunters who were after them.  While everyone is in the center of town, the men pursue Hardin through the deserted out buildings.  One cajun traps Hardin in a barn and shoots him is the shoulder.  He is planning on killing him slowly.  Spencer arrives and shoots at the cajun.  Hardin stabs and kills the cajun.  (The music and festival are so loud, and the cajuns are shooting pigs to roast, so no one in the festival realizes what is going on.)  They manage to kill a second hunter and knock out the third, then head back out into the swamp in fear.

The movie ends with Spencer and Hardin reaching the highway, being picked up by a military vehicle. 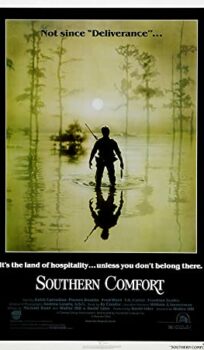