It turns out that the medallion around Lone Starr’s (Bill Pullman) neck is a royal birth certificate.  Using the can of liquid “Schwartz” in the glove compartment left by Yoghurt (Mel Brooks), Lone Starr and Barf (John Candy) are able to make it back to Planet Druidia before Princess Vespa (Daphne Zuniga) is forced to marry Prince Valium (JM J. Bullock).

With little effort needed, Lone Starr convinces her to marry him instead.

In the end, it turns out that Dark Helmet (Rick Moranis), Colonel Sandurz (George Wyner), and President Skroob (also Mel Brooks) survive the explosion of Spaceball 1, and they all crash land on the Planet of the Apes. 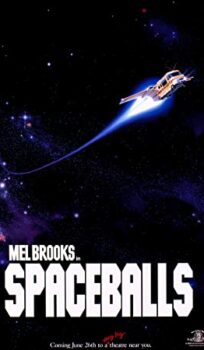