Franz Oberhausar (a brilliant, Cristoph Waltz) is actually Ernst Stavro Blofeld. Blofeld is the son of the man who cared for James Bond (Daniel Craig, completely inhabiting the role) after Bond was orphaned.

C (Andrew Scott) is part of SPECTRE. C is attempting to abolish the “00’s” and start the “Nine Eyes” intelligence program which would network the intelligence of nine major countries. SPECTRE is executing terrorist attacks across the globe so that the countries will be scared enough to pool their data. Blofeld has an enormous computer complex in the North African desert where he can access all of the world’s intelligence information once Nine Eyes is launched.

Bond finds Mr. White (Jesper Christiensen, from Casino Royale and Quantumn of Solace) dying of radiation poisoning in Austria. Before committing suicide with Bond’s gun, White tells Bond that Dr. Madeleine Swann (Lea Seydoux) is White’s daughter. She is in Morocco and she can help him find SPECTRE’s headquarters.

The L’American is a hotel where White, his wife and Madeleine would spend the couple’s anniversary. Bond finds a secret room (thanks to a helpful mouse) with maps, data and the coordinates of the SPECTRE stronghold. While traveling there by train, they are attacked by Hinx (Dave Bautista). Bond throws Hinx off the train (…but we do not see him die).

With the help of Q, M (Ralph Fiennes) and Moneypenny (Naomie Harris), Bond attempts to arrest C, but the team is ambushed and Bond is taken to the old MI6 building that is scheduled for demolition. Swann, who travels to London, but decides to leave Bond rather than return to the spy world, is kidnapped. Bond breaks free only to find Blofeld in the MI6 building. Blofeld sets the building to explode in three minutes and challenges Bond to save himself or die trying to save Swann. Meanwhile, M confronts C while Q disables Nine Eyes. M & C fight and C falls out of a window to his death.

Of course, Bond saves Swann. The two pursue Blofeld’s helicopter from a boat on the Thames. Bond shoots out the rotor causing the helicopter to crash. Blofeld crawls from the copter with his left leg injured. Given the chance to shoot Blofeld, Bond decides not to kill him and M takes Blofeld into custody. Bond and Swann leave the scene together. 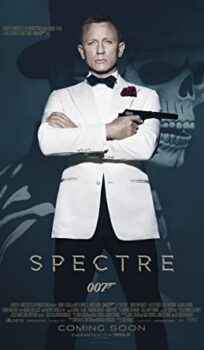