While the whole crowd cheers, Speed wins the Grand Prix after using Taejo’s invitation given to Speed by Taejo’s sister, Huruko. Cannonball Taylor uses the device that Spritle and Chim Chim saw earlier at Royalton Industries.

In an amazing move Speed tilts both cars so there is a full camera view of the illegal device.

Commentary says Cannonball will probably not make the hall of fame.

Newspapers show that Royalton goes to jail for his crimes while Speed and Racer Motors do very well.

Racer X lied to Speed when he removed his mask. He faked his death by blowing up his car in the cave, got plastic surgery to change his appearance and really is Rex Racer. The only person that knows the truth is Inspector Detector.

As promised Speed kisses Trixie in front of all the flashbulbs after winning the grand prix. 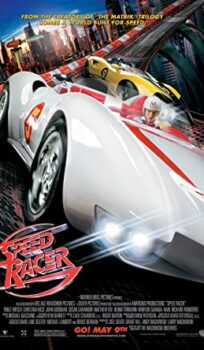