When Jack (Keanu Reeves) realises that the hijacker (Dennis Hopper) is watching the inside of the bus through an on-board close-circuit television camera, Jack get’s a message to the people on the ground, who get a news company nearby to find the frequency of the video recording and loop it. Harry ventures into the hijackers house and it blows up killing him. They evacuate the hostages on the bus over a board connected to an another vehicle alongside it, whilst Jack and Annie (Sandra Bullock) escape through the bottom of the bus on the floor panel, after rigging the steering wheel and accelerator with piping and rope so that it wouldn’t stop moving. The bus drives into an airliner and explodes. When they think it’s all over, and the hijacker learns that he has been fooled, he pretends to be a policeman and takes Annie hostage again. He, Annie and Jack end up on a subway train, with bombs strapped to her. The two men end up on top of the train and Jack kills the hijacker. The train then jumps the tracks and lands outside in the middle of the street, Annie and Jack safe inside, kissing. 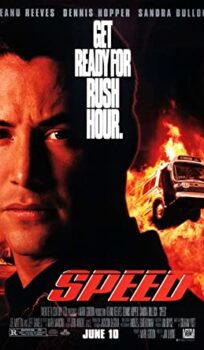